Karen Mackey has been the executive director of the Sioux City Human Rights Commission for 16 years. She is one of the co-founders of the Siouxland Pride Alliance, which is a grassroots LGBTQ organization that connects the community through resources, opportunities and events. A member of the Santee Sioux Tribe, Mackey is also the chair for the Iowa Democratic Party’s Native American Caucus.

When she’s not busy doing one of those things, as a rokudan — or sixth-degree black belt — Mackey teaches judo in the greater Siouxland area.

I am passionate about judo more than anything. I started doing judo when I was 16 years old. Judo is an amazing sport.

I do not think I would be doing the things I am now but for judo. I can’t even imagine who I would have been if I hadn’t gotten into judo by accident because my brother got beat up one too many times.

It took me down a totally different path. When I started doing judo, women could not compete. I was two years into it when women could compete, and that year I competed in nationals. It was the fourth tournament I had ever been in. I had no idea what I was doing. I cannot believe my father flew all of us out to California so I could get my behind handed to me in seconds. It was a foolish waste of money, but it was a lightbulb moment. I looked around and went, “Hmm, I think I could be good at this. I could do this.” And so I kept doing it.

At the time I retired to attend law school, I was ranked No. 2 in the country in my weight class and was an alternate to the world championships that year. I went from someone who could not fight her way out of a wet paper sack to someone who truly ended up being a solid national-level competitor.

It helped me in the rest of my life to realize that where I start isn’t where I have to end up. It gave me the courage to do the things that made me afraid.

A good friend of mine, AnnMaria De Mars, was the first American to win a world championship in judo. She has a saying that goes, when your idea of a fun sport is something where the ultimate goal is to choke someone unconscious or break their arm, nothing much in life scares you. And she’s right.

In 1989, I was going to nationals, and I had hurt my back two months before at work. I couldn’t work out at all, my back was just killing me. But I had already paid for my airplane ticket and my entry fees, so I was going.

I couldn’t do my favorite throw. It’s called a tani-otoshi and it’s a valley drop. It’s basically a win-big, lose- big throw. You let the person come in like they’re going to throw you, and the second they turn their back on you, you run into them with your body to stop their forward momentum and throw them backwards. There’s a big twist at the end. If you do it right, you land on top of them. If you do it wrong, you will land on your back and lose. When I can do it, I do it very well.

But I couldn’t do that throw at all. I couldn’t do the twist. My lower back was all jacked up. A whole lot of judo throws involve torque, especially the twisting of the back. I didn’t know what I was going to do.

So I get to nationals and I was fighting in two divisions. I was just old enough to fight in the old folks division (masters), and the senior division. You wanted to win seniors. I would use masters as a warmup because it always started slow. I had no problem getting to the finals in that.

The first person I had to fight in seniors is someone who I had never beaten before. We had some mutual friends who were there, and they were teasing me about not being able to beat her. One of them said, “I’ll give you a buck if you beat her.” The other one said, “I’ll give you two bucks.” The third said, “I’ll buy you a drink.”

She was very hard to fight. If you attacked her at all, she countered. I was trying to figure out what I could do. If you land on your back, it’s match over. It’s like a knockout in boxing. I knew I could pin her if I could keep the momentum going. I threw her, rolled her over and pinned her. I just had to hold her for 30 seconds.

Eventually, I made it to finals that night. They only have one mat going for finals. There’s a couple thousand people watching you.

Judo is a very insular sport. It’s not something you’re going to watch on TV in this country and casual fans are going to show up. These are almost all judo people. They know their judo. So there’s a couple thousand people who can critique what you’re doing in real time.

The person I had to fight, I had never beaten in my life, because she was honestly better than me. I had a real fear that I was going to injure my back worse.

Finals matches back then were seven minutes. Seven minutes is an eternity. It is ridiculously long. Now, national and international matches for women are four minutes.

There was this guy that walked along, and he told me, “You’ve got to buck up. You’ll be fine.” I thought, OK, at least one person believes in me.

I go out to the mat and I’m hanging with her. Somehow, a minute and a half into the match, I threw her and I got a low-level score. She can’t get in on me. I’m locked down. I’m already tired. We’ve got five and a half minutes to go. I have to run like hell but not make it look like I’m not engaging because stalling is a penalty. But I’m ahead. I’m going along and I’m tired. She is a brutal woman. She is a very tough and mean competitor. She wasn’t a very particularly nice person. She used to pick on new competitors. She was a bully.

I had about a minute and a half left to go in the tournament and all of a sudden, I’m on the ground being pinned and I can’t breathe. I can’t move her, I can’t twist. I can’t do anything.

She won. But I fought the best match of my life. At a time that I was scared of a lot of things, scared of getting hurt and being embarrassed, I fought so well. Everything came together. My body wasn’t working, but my mind was.

I was looking to get into law school, and they always want you to write about something. That’s what I wrote about. That instance of losing. I lost but I won because what I got was a lot of respect from people.

The people that were referees back then will talk about that match and say that I was such a beast back in the day.

I use it as a teaching moment. Bravery isn’t the absence of fear. It’s harnessing the fear. Everyone’s afraid. We are all afraid. I was always afraid.

WHAT DOES IT MEAN TO BE FEARLESS?
Everyone has fear, so being fearless is not about being unafraid. It is about harnessing that fear to give yourself strength to do whatever it is you need to do.

WHAT DOES BEING FEARLESS LOOK AND FEEL LIKE?
You may be shaking on the inside but people don’t see that on the outside. You look calm and composed and you’re doing the things you need to do. People can be fearless every day, literally. Someone who has physical limitations, they’re in pain, they have emotional issues, they have mental health things they’re struggling with … they can still be fearless. Getting up and facing the day is being fearless some days. There are some days where you just want to pull the blankets back up over your head and just surrender. It’s fearless to get up and move on and live your life even when you’re afraid, even when you’re in pain.

HOW DOES A PERSON BECOME FEARLESS?
You become fearless by starting in small ways to face fear. You have to face what you’re afraid of. If you run from it forever, all you’ll do is run.

WHAT ARE YOU AFRAID OF?
I’m afraid of failure and looking stupid. Afraid of looking incompetent. I’m afraid of a lot of things. We all are.

DRAW THE WORD FEARLESS.
If I had to draw the word fearless, it would be a white belt judo player. A brand new one. That is seizing fear and controlling it, being a beginner in judo. That is the essence of fearless. 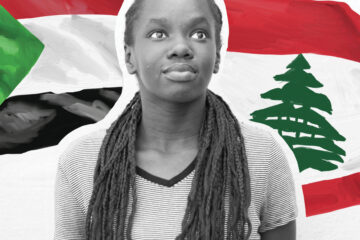 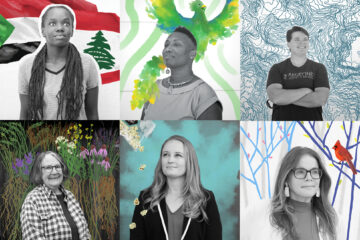 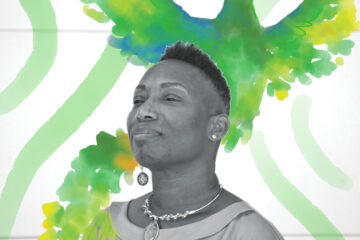