Lessons of resiliency through two natural disasters, a career change and a divorce

This time I made it home before the storm hit. Living with two years of motherly guilt for being at work and not by my son’s side during an EF-3 tornado, I was relieved to delegate office safety during the August derecho.

There was something significant about the comfort of home during the destruction. We were stuck. There was nothing to do for about an hour except stay together in the dark and unknown. The totality would soon be revealed, but these moments were filled with fear and togetherness.

I was grateful for the shared experience because for the next seven days, I would rarely see my son with brief glances up from my laptop and by the glow of a flashlight.

When I moved to Marshalltown in June 2018 to take the role of publisher at the Times-Republican, I was eager to return to the beloved city where I had served as editor for five years. I’d long ago fallen in love with Marshalltown, its character and its people.

Thrilled with the opportunity and new beginning, I also ached with loss amid a divorce and relocation from a community in which I’d lived for a decade.

When a tornado ripped through the heart of Marshalltown right after the move, I was devastated. But the recovery kept me buried in work and gave me purpose alongside learning an entirely new job and acclimating to my new life. The experience, the solidarity with community and the beautiful progress that has been made since that summer day are a part of me now. While I am boundlessly appreciative for what unfolded, the reality of my role as a leader nearly claimed my entire life.

I came across a quote and decided to adopt it: “Life is tough, my darling, but so are you.” I added this to a ridiculous arsenal of beliefs:  I am supermom, I can do it all, I will not fail.

With ideals like these, I suffered deeply. I eventually had to come to terms with my humanness, which meant more reliance on my faith and the people in my life.

Perhaps the largest lesson I learned that year was asking for and accepting help. I readily sought support from colleagues, family, friends, spiritual mentors and paid professionals. Once I did, the loneliness to which I had subjected myself vanished. The people rooting for me in my professional and home life seemed to multiply. Suddenly, the people rallying around me came into sharp focus, the encouragement palpable. They helped me believe in myself again.

Before long, though, was a beatdown in form of a global pandemic that impacted all areas of life. Our business, and my life, were no exceptions. My ability to rely on faith and on others was tested again.

On Aug. 10, as I took in all of the destruction, I wondered, why me?
Later, I would amend that question, why not me? For a third time in my short tenure in Marshalltown, I would lead my team, both personally and professionally, through the catastrophe. There was nobody more experienced or prepared for this job. Nobody had a better network of people to rely on.

We moved forward without hesitation. Shaking off the shock, we got boots on the ground and started reporting the best we could without power or the internet (again). As days passed, things improved just like they did after the tornado. We’re getting through it, with plenty of help. Experiencing disasters doesn’t make you resilient. What makes you resilient is what you do with the disaster, what lessons you gain and who you learn you can count on. Even if they’ve been there all along.

Abigail Pelzer is the Marshalltown Times-Republican publisher, the first woman to hold the position. She was previously the editor of the Newton Daily News and the Times-Republican. She is actively involved in the city, serving on the Marshalltown Area Chamber of Commerce board, among other commitments, and also serves in several capacities with the Iowa Newspaper Association. You can reach her at apelzer@timesrepublican.com

Great article Abbigail! Indeed you are one strong resilient woman! So proud of you! You go girl!
Linda Pierce 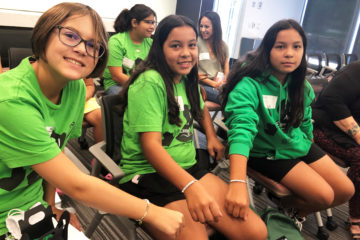