Amy Getty is an English professor at Grand View University, where she has worked for 19 years. She is the club adviser for the American Association of University Women chapter at Grand View and has previously been involved with the organization at the local and state levels.

She has led salary negotiation workshops at Grand View for six years. The program teaches students how to research their target salary, identify their strengths when it comes to negotiation techniques and find confidence to negotiate for a better salary and benefits.

I’ve been teaching women’s studies for many, many years. It’s easy to fall into seeing what’s wrong and feeling hopeless. When I heard about the AAUW salary negotiation program, a bunch of departments pooled our budgets together and bought the license. We offered as many workshops as we could because it seemed like a tangible thing to do to help close the pay gap. Knowing all of the inequity out there, it’s so easy to feel that there’s nothing we can do about this. This was a small program where you could learn how to negotiate.

I didn’t negotiate my salary and I know that my pay is lower because of it. I use myself as an example. I didn’t know how to negotiate. I’m a total introvert so there’s no way I would have asked for more money. I don’t feel like it’s a huge gap, but I do feel like if I had negotiated at the beginning, I’d be farther along. I wish I had negotiated. I had never even heard about it. I think part of it is also that teaching vocation. I hear it from nursing as well. Those two professions are seen as service professions. I think we think, “Oh, the pay doesn’t matter because we love doing it.”

I’ve always wanted to teach. I like translating what I love into something that students can use. They’re not always going to love it at the end, but I hope that they really see the value of it. I like helping people think more critically. I’ve never been afraid to go into a classroom and teach what I’m teaching. So I guess in a way, that’s fearless.

Anybody who knows anything about gender and women’s studies and the pay gap — it’s exhausting. It never changes. Ever. Running up against people who say that we’ve got it fixed, and that there’s no racism, no sexism, no classism, no homophobia. People who are constantly spewing that are not paying attention. So I guess persistence would be a better word, because it’s so exhausting. I’m so tired. But here I am again, teaching this fall. You’ve just got to keep going.

I had a student at a community college in Oregon. He had been home-schooled in a very conservative, religious environment. This was during the Bush-Gore election. He would write things like, “I’m not a bigot, but …” and that never ends well. Anytime you open a phrase like that, it’s not going to end well. He would write things and spew hatred of everybody.

I did what I could but at a certain point, education can only go so far. The person who is in the classroom has to meet you partway. I’ve had some great conversations with students like that as well, who didn’t necessarily ever agree with anything I was teaching, but at least came to see that it was a perspective that they didn’t agree with for X reasons.

But I gave that student that exposure. That’s so much more than many people get. You can only ask people to meet you so far, and that’s why I try to respect where they’re coming from. Even if I think they’re completely wrong.

I know they have so much to lose if they’re going to completely break with their background. It’s asking a lot for some students to have them change a worldview. I’ve had some students who have come in and got woke — or whatever the phrase is nowadays — and have had conflicts going back to where they came from. Education can be transformative, but it’s also steeped in loss. You have to just be aware of that.

My main thing is not to necessarily change their mind about stuff, but to show them how much stuff is out there that they are experiencing all the time that they don’t even notice. Especially with teaching gender issues. I try to find stuff in their own lives that they can pull in. If you’ve got different perspectives from different aspects and views of society, and the more people are exposed to people who are not necessarily their family, their neighbors, people who are like them, I think more experience like that is better. But what they do with it is up to them.

I think you have to be persistent [to be a professor]. You can have the worst day ever on a Monday, and then you go back on Wednesday and it’s a completely different class. That’s energizing. If you’re not persistent, you can’t be a teacher. It takes something to go into a classroom and have 20 people stare at you for an hour.

WHAT DOES IT MEAN TO BE FEARLESS?
I think it means you keep going no matter what. Even if you have some trepidation at the beginning, you persist and keep going, even if you don’t really want to.

HOW DOES SOMEONE BECOME FEARLESS?
If you have a really strong sense of purpose and you know what you want to get done, it’s easier to do it. You are afraid but you’re more afraid of what the world would be like if you didn’t keep doing it.

DRAW IT.
[I would draw] Rosie the Riveter. They went in every day and did what they needed to do. That idea of persistence, that image is a very striking one and that’s why it’s still around, I think.

What a beautiful piece!
“Education can be transformative, but it’s also steeped in loss. You have to just be aware of that.” 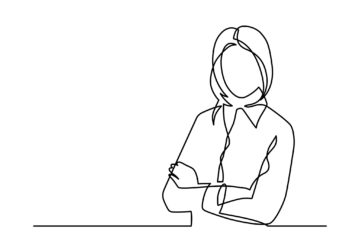 Experts weigh in: How can we address barriers to financial success for women?

By Emily Kestel Despite controlling a sizable chunk of the wealth in the United States and often serving as primary financial decision-makers in households, women face many systemic and personal barriers when it comes to Read more…

By Brittany Heard, lead adviser, Foster Group In my role as a financial adviser, I get to meet with a variety of people from different stages of life who have different experiences with money. Some Read more…