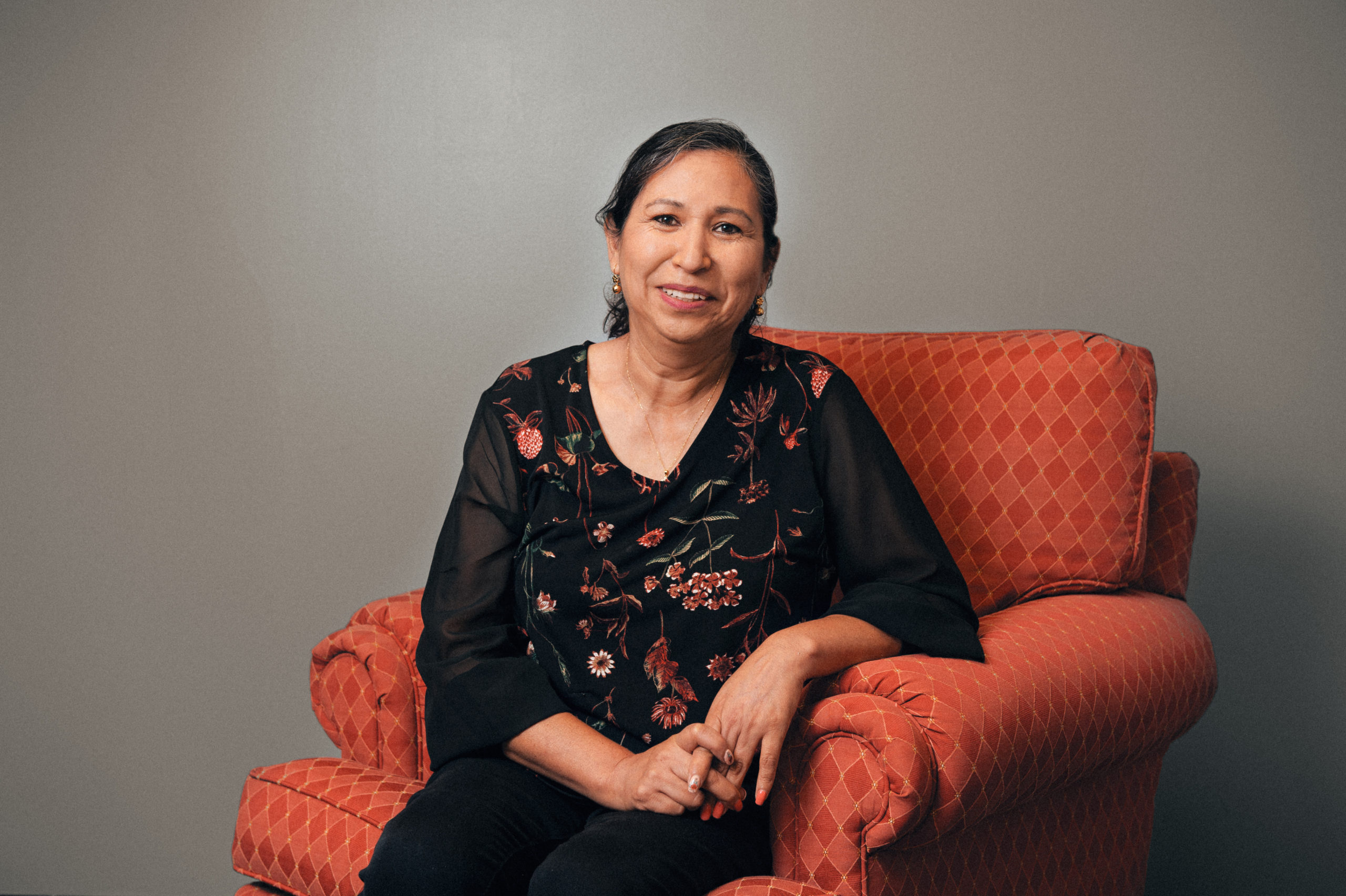 Some people are drawn to their life’s calling almost naturally. For others, like Elizabeth Balcarcel, that larger purpose finds them — perhaps by fate, by chance, or a bit of both.

Balcarcel serves as director of state program technical assistance at Iowa Coalition Against Sexual Assault (IowaCASA), a nonprofit dedicated to providing services to survivors of sexual harassment, abuse, and assault and preventing sexual violence. She oversees a team that provides training for IowaCASA’s 28 statewide programs for survivors. She couldn’t imagine doing anything else.

But getting there wasn’t so straight and narrow. And as she reflects today, Balcarcel is astonished by how far she has come — as an immigrant turned fearless advocate.

“I have no college or university degrees,” Balcarcel said. “What got me to where I am is passion — the passion I have to help my community and the work I’ve done there.”

Finding work that inspires that passion was a long journey — literally and figuratively. Born in Zacatecas, Mexico, Balcarcel came to the United States in 1990, first to California, then to Iowa in 1995. She gained U.S. citizenship in 2013. After earning a nursing assistant certificate at Des Moines Area Community College, she spent years providing home health care and caring for senior citizens in nursing homes.

Given how and where she grew up, Balcarcel never expected advocacy around sexual violence to be her life’s work.

“In Mexico, that kind of violence is regarded as just part of normal life,” she said. “If you’re lucky, you end up with a good partner, and if you’re unlucky, well, you’re unlucky.”

In 2003, Balcarcel began working as a sexual assault prevention and domestic violence advocate at a crisis center at L.U.N.A. in Des Moines, which provides services to Latina survivors of domestic abuse and sexual assault. The Latino community connection was a plus, but Balcarcel’s impetus in applying for the job was not the cause’s nobility. It was the flexibility of working part-time. Balcarcel intended for L.U.N.A. to be a short-term stint to enable her to accomplish some goals at home, including spending more time with her children.

She stayed five years — and found her passion along the way.

Balcarcel is conscious that her background — as an immigrant woman of color who grew up poor, with only a high school education, and speaks English as a second language — bears a closer resemblance to many survivors IowaCASA serves, rather than those in leadership positions.

She learned early on at IowaCASA that her perspective was an asset. Known for her “quiet wisdom,” as a former supervisor once observed, Balcarcel doesn’t talk a lot, but when she does, she’s effective in challenging people because she speaks from the heart.

One of her most formative experiences was in 2008, after immigration agents raided a local meatpacking plant in Postville, Iowa. Nearly 400 people, mostly Latinos, were arrested and detained in a small town of just over 2,000 — one of the largest workplace raids in U.S. history.

In the raid’s immediate aftermath, advocates like Balcarcel were brought in to support survivors, traveling to a makeshift detention center in nearby Waterloo to help bridge essential connections — attorneys with detainees, survivors with emergency resources and services, and detainees with family members outside.

At the time, Balcarcel was a legal permanent U.S. resident, so she needed to bring her green card to the detention center each day. For everyone there, including advocates, every movement — even going to the bathroom — required an Immigration and Customs Enforcement (ICE) officer escort. Detainees were cuffed at the wrists and ankles and moved together in a line.

The draconian atmosphere brought back a wave of fear and traumatic memories — because Balcarcel had been an undocumented immigrant herself. In fact, she crossed the border twice. In January 1990, when she first moved to California, the only thing Balcarcel brought with her was a tiny cross, a sign of her faith that she would be all right. She returned to Mexico briefly in November that same year after a sibling died, a trip that necessitated making the dangerous border crossing again.

“So, in Postville, I knew how it feels to experience all of that,” Balcarcel said. “I knew what the detainees were feeling, what their family members waiting outside for them were going through. I could have been there myself — seen as a criminal. Seeing the detainees in chains, I couldn’t stop thinking how lucky I was that I never saw myself in that situation.”

“We cross the border thinking we will give our people and families a better life,’ she said, “but now our [American] children are chasing us and arresting us.

“No, they’re not. Not all of them,” Balcarcel said. “Many come just because they want to have a better life.”

Someone interrupted the exchange at that point — “maybe because they were worried I might get arrested,” Balcarcel said.

The conversation didn’t end there, however. After they finished interviewing detainees, the officer approached Balcarcel again. “Yes, I feel bad sometimes,” he acknowledged.

She thanked the officer for taking the time to share that. “It told me he’s just doing his job,” she said. “The thing is, we need good ICE officers who do their job with respect and treat people with dignity.”

Balcarcel believes that greater education around the realities of immigration and the humanity the officer revealed are both sorely needed.  “Not many people understand undocumented immigration,” she said. “They say we should come here the right way.”

The “right” path, Balcarcel argues, has too many inaccessible requirements. Those with money can come to the U.S. legally to do business. Likewise, those with family members in the U.S. can have them sponsor them. But the legal avenues often become untenable because those options aren’t realistic.

“Most of us don’t have the money — we need to come and survive,” Balcarcel said. “The family route is only for immediate family members — spouses and children. Not siblings and other family members. The lengthy process of reuniting with siblings, for example, can take 15 years.”

The memory of her own harrowing immigration journey continues to fuel Balcarcel’s determination to help those most in need. Her own experience with language barriers, for example, has made her a vocal proponent of offering translation and interpreter services in multiple languages.

Her advocacy work has also awakened Balcarcel to the power of bringing what’s too often seen as “just normal” out into the open.

“Doing what I do makes me more conscious of the hidden meaning in things we blindly accept in our culture,” she said. “What do the messages in a popular telenovella mean and send to everyone watching? Our culture normalizes a lot of terrible things. Sexual violence is an unspoken issue in our communities. Not everything we see, hear, and do are wrong, but many messages we send in our culture are not the right ones and are part of the problem.”

Now at IowaCASA for 12 years and in the wider field of sexual violence advocacy for nearly two decades, Balcarcel cannot imagine doing anything else. In recognition of that service, Balcarcel was one of six community leaders inducted into Iowa’s Latino Hall of Fame in October 2020.

Indeed, Balcarcel is so deeply engaged with the wider Latino community, it’s hard for her to stay away from the advocacy work. Even outside of working hours, people are always reaching out to her to ask about help and resources.

“It’s rewarding to see how you can help people to think differently and to connect them with resources they may not even know they need,” she said. “Seeing the faces of survivors, where all they can say to you is, ‘thank you, thank you for listening.’ That’s everything.”

The Iowa Coalition Against Sexual Assault (IowaCASA), L.U.N.A., and Des Moines Area Community College are not an affiliate of any company of the Principal Financial Group.