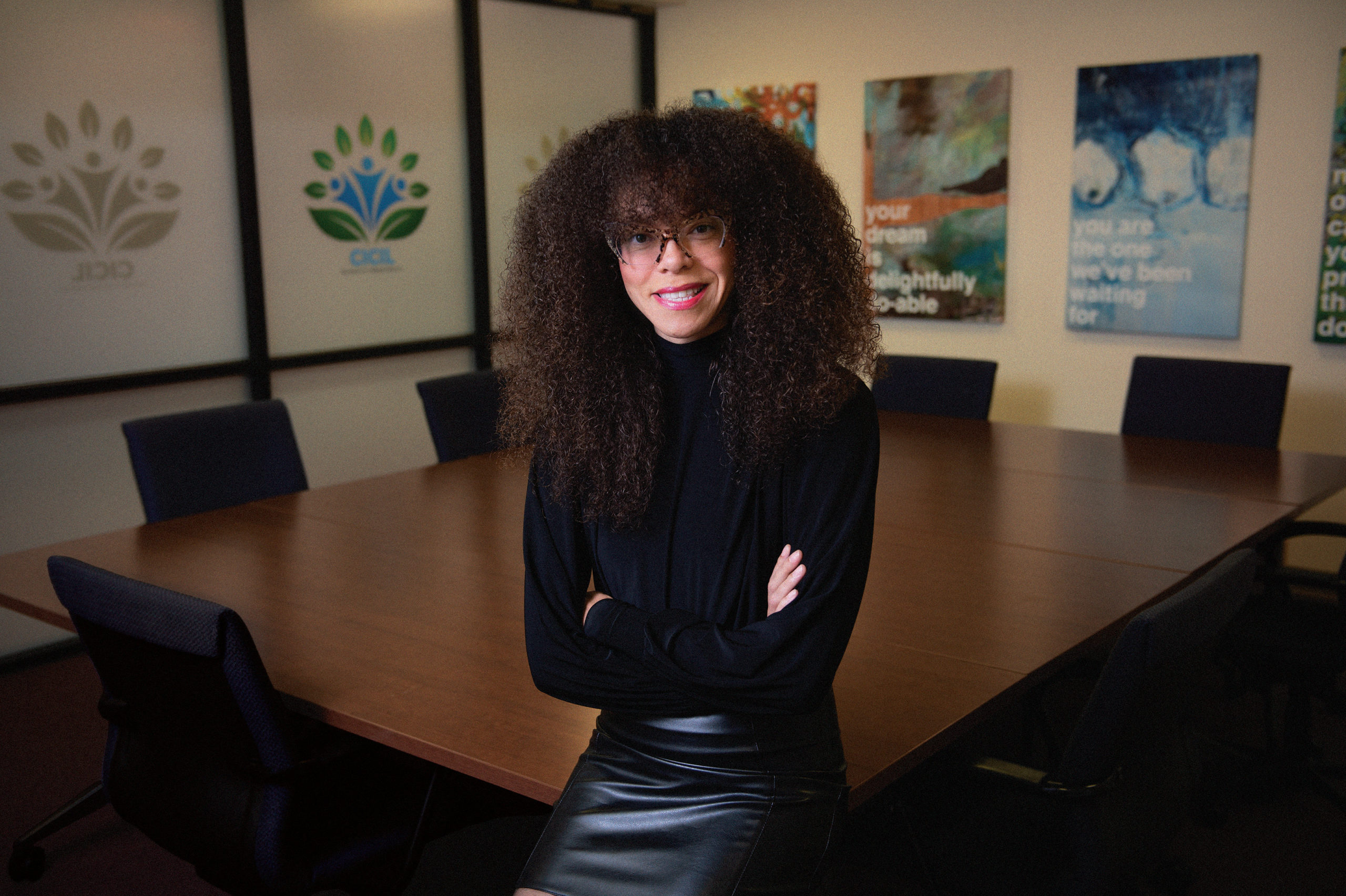 Reyma McCoy McDeid couldn’t hide anymore. It was 2014, and McCoy McDeid, then working at a Des Moines organization that helps individuals with intellectual disabilities, had to disclose one of her deepest secrets: She was autistic. Her entire life, she had masked her symptoms — her ticks, her unquenching desire to organize, her odd mannerisms. Now she was in the middle of a high-risk pregnancy, and it became almost impossible to hide any longer.

McCoy McDeid sat down with her supervisor and laid it all on the table. On one hand, there was relief. McCoy McDeid had tried to hide her autism since she was a young child. She knew, sooner or later, she wanted to live authentically. On the other hand, she saw firsthand how perceptions changed among her coworkers.

The day before, her colleagues spoke to her as an equal. Now, their language was simplified. She wasn’t treated the same.

“I think it’s more important that society meet people where they are at, rather than speaking on these people’s behalf.” — Reyma McCoy McDeid, executive director of the National Centers for Independent Living

McCoy McDeid has become one of the foremost advocates for marginalized communities, particularly those on the autism spectrum like herself. She’s run for political office, worked on national administrations, led nonprofit organizations, and started her own business to help others learn and improve. All of those actions have been with the same goal — making sure communities recognize and value input from all people.

“I think it’s more important that society meet people where they are at, rather than speaking on these people’s behalf,” McCoy McDeid said.

Hiding her true self

Being an outcast isn’t new for McCoy McDeid. Born in Detroit in 1980, she was always the “weird kid,” she said. She didn’t talk until she was 5. She had a tendency for repetitive motions, like touching or organizing things.

At the age of 6, McCoy McDeid’s parents abandoned her. She became a ward of the state. Not long after, she was diagnosed with autism, which wasn’t fully understood by medical professionals at the time, let alone the general population. Autism was first classified as its own diagnosis, separate from mental illnesses such as schizophrenia, in 1980.

The lack of understanding made life hard for McCoy McDeid, who was labeled special needs. The difficulties were only compounded by the fact she moved from foster home to foster home. She estimates she moved about once a year and attended 12 schools by the sixth grade. In all, she lived in 10 different homes as a child.

McCoy McDeid quickly learned how to hide her autistic tendencies, so she could be seen as everyone else. She leaned into the preconceived notions of what made a person “normal,” a habit that lasted into her late 20s.

“It made me feel inauthentic, and, to a certain extent, I would overcompensate and work really hard at being normal,” McCoy McDeid said.

McCoy McDeid earned a full scholarship to Iowa State University, bringing her to Iowa in 1998. As a person who was a part of human services her entire life, she noticed Iowa had a more streamlined system. The people who worked in that field were empathetic and more supportive, she noticed. That’s how she decided to become a human services provider in the state.

She worked for a youth shelter in Ames, Iowa, in 2000. She moved to St. Louis to obtain a master’s degree in 2009 and then returned to Iowa in 2010 to work in human services leadership positions. She became the executive director of Central Iowa Center for Independent Living in 2015, a nonprofit organization working to eliminate the institutional and facility bias in long-term supports for people with disabilities. She’s since become the executive director of the National Center for Independent Living, overseeing hundreds of facilities.

Life has come full circle for McCoy McDeid. She now dedicates herself to ensuring others get the support she didn’t. And she’s making waves doing it.

“I had no ambitions to prove anyone wrong. I just knew they were wrong,” McCoy McDeid said.

“I was fully committed to living my life. Some kids are born with that survival instinct that compelled them to defy the odds. I was one of them.”

That doesn’t mean there weren’t any doubters.

As a Black woman leading an organization, McCoy McDeid saw a clear disparity. She was a part of a national pool of hundreds of independent living centers, and less than 10 of the directors were Black. Passionate about creating an equitable society, McCoy McDeid believed that was a clear problem.

“My goal is to ensure disabled people are leading and serving other disabled people, resembling the diverse configuration of the community,” McCoy McDeid said. “We’re not all white people in wheelchairs, and there’s an incredible amount of diversity within the disability community. We need to see that at the decision-maker level.”

McCoy McDeid has made that message loud and clear on a national level, but it hasn’t been readily received. Many other leaders express concerns about the topic, believing it would lead to divisiveness the dwindling of independent living centers.

For example, in the summer of 2016, McCoy McDeid spoke at the National Council on Independent Living’s annual conference. Her presentation was about the history of Black Americans in the independent living movement. She made it clear: There was still a disparity. And it needed to be addressed.

After the speech, she was approached by a key figure. She expressed concern that her message was divisive, encouraging her to focus on similarities rather than differences. McCoy McDeid responded with a question: “Should we leave the fact that we’re woman at the door, too?”

“She got a little frustrated and walked away,” McCoy McDeid said. “There are a lot of disabled in the country who are Black or Brown. For whatever reasons, usually rooted in systematic inequity, they don’t have access to services and support. That’s what compels me to continue doing what I do in spite of the fact that I experience a lot of push back on a daily basis.”

McCoy McDeid said she’s had eight grievances filed against her because of the conversation about systematic racism. But her spirit hasn’t wavered, even if she does have doubts and trepidation.

“I’m riddled with anxiety all the time,” she said. “That doesn’t stop me from doing what I’m compelled to do, what I feel needs to be done.”

Today, one of her big motivators is her daughter, Alsatia. Her birth seven years ago was one of the key reasons why McCoy McDeid wanted to be open about her autism. As a mother, McCoy

McDeid is preaching the same message she has in her professional life: That there are systemic inequities, and it’s up to us to fix them.

“She’s like a smaller version of me,” McCoy McDeid said with a smile. “I want her to have a clear understanding of the society we live in, in an age-appropriate way. I don’t want her to learn that through painful life lessons, obviously. But I don’t want to shield her from the realities of society either.”

And so, despite challenges, McCoy McDeid continues to push — for her daughter, for those marginalized and for those who don’t have a voice. And even if it can be difficult, that’s the definition of fearlessness for McCoy McDeid.

“When we think of brave or fearless people, we think of people who are operating with extreme confidence and are busting through barriers,” she said. “That’s not me at all. I live with trepidation every day. I know the conversations that I breach need to be breached. But we have a whole bunch of people who don’t want to breach them. But my trepidation is very much coupled with an imperative, and so I proceed anyways.”

Thank you for sharing your story and for being an amazing example of making good trouble! So grateful for your leadership! 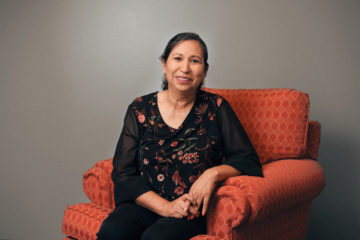