Advocating for Others: Lynh Nguyen Patterson 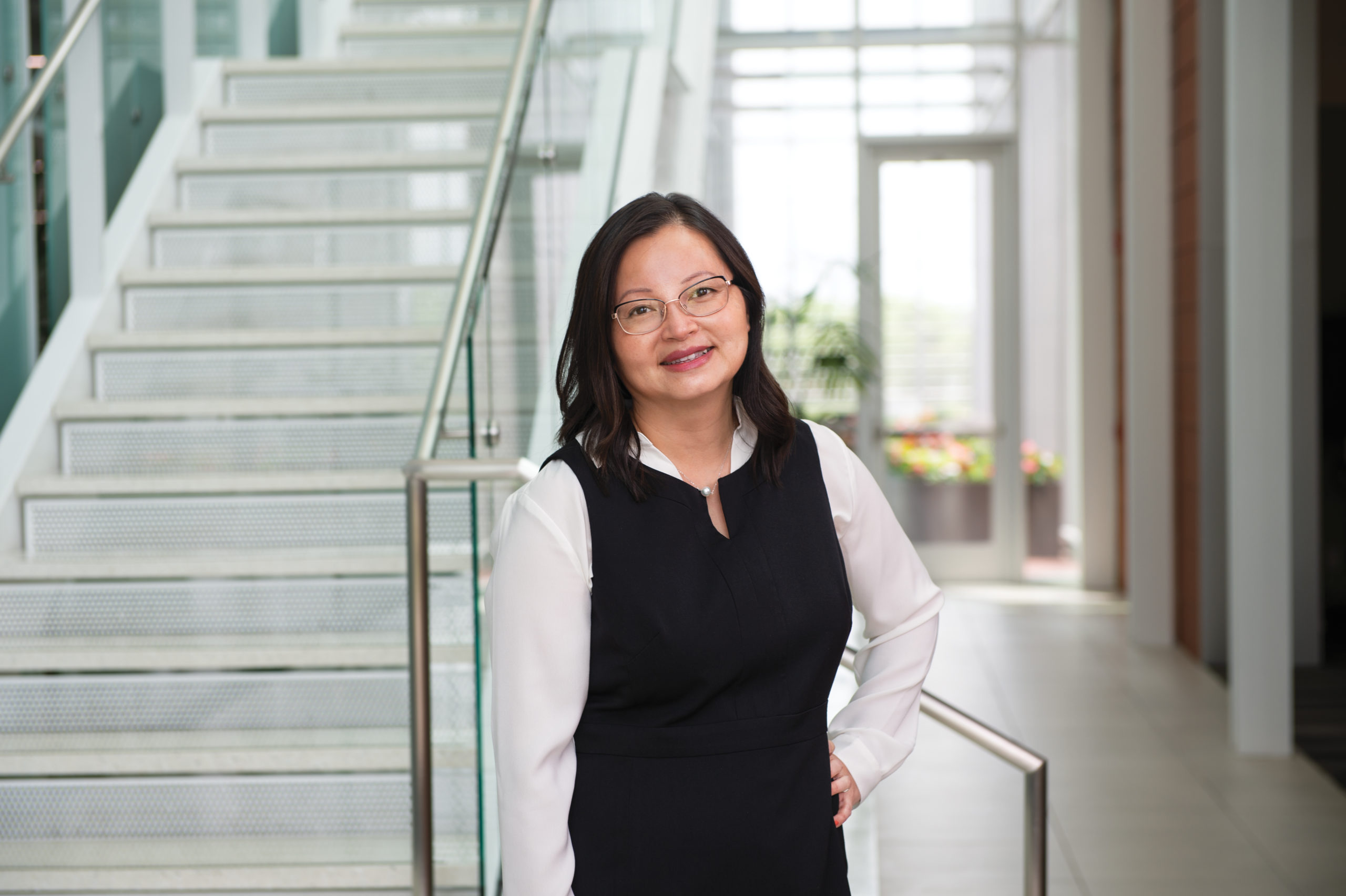 Lynh Nguyen Patterson knows how to talk teeth. And she knows how to make you care. That’s her job as government relations manager at Delta Dental of Iowa, a nonprofit insurance company. Patterson’s primary responsibility is to convey to legislators the value of oral wellness as a critical public health issue and call for supporting policies.

Although Patterson is keenly aware lobbying is seen as mercenary by many, she doesn’t it view it that way. She spends time working toward cost-efficient policies that expand access because “ultimately, it’s about advocacy, being the voice for underserved people on important issues—oral health in my case,” Patterson says.

Patterson can make you care because she cares. She watched her own parents struggle with poverty, and she sometimes seemed out of place as an immigrant in the United States. But that background laid the foundation for her career in government relations—as an advocate for others.

Patterson didn’t have the elite, law-school pedigree associated with many working in government. Her immigrant family came to the United States from Vietnam in 1975, when Saigon fell and the Vietnam War all but ended.

Her family started a new life in Minnesota, which had a thriving Vietnamese community in the Twin Cities. Patterson was only 2 at the time, so she has no memory of those early journeys. Nevertheless, Patterson grew up in two distinct worlds. At home, in her family’s house, she was Vietnamese. Everywhere else, in the overwhelmingly white Minneapolis suburb of Plymouth, she was American.

Patterson’s youth was welcoming, so she didn’t feel like an outsider. Still, as one of only a handful of Asian kids in her community, Patterson was always aware of being an immigrant despite not feeling like one. She often said she was from Minnesota—the only home she’d ever known—not Vietnam. Because of that duality, “I never quite knew where I fit,” she says.

Patterson didn’t realize it at the time, but what was absent from her childhood laid the foundation for her future career. Her parents weren’t political. Like many Vietnam War-era immigrants, their struggles revolved around emerging from poverty. Her father worked in social services. Her mother often worked two or three jobs.

Seeing her parents’ constant toiling to build a new, better life from the ground up instilled in a strong work ethic in Patterson and her older brother. But when it came to navigating the path to that better life for herself, Patterson was on her own.

“When I applied to college, my parents didn’t know,” she says. They couldn’t give her guidance “not because they didn’t care, but because college wasn’t even on their radar. They wanted me to do well, but that path wasn’t familiar to them.” She eventually made her way to the University of Minnesota, picking journalism as a field of study.

College is where Patterson discovered her passion for policy and helping others. A casual conversation with a friend led her to Participation 2000, a grassroots “campaign school” dedicated to teaching young people how to work on political campaigns. Patterson was admitted, and after a week of training, she was assigned to help Rep. Leonard Boswell first’s congressional race in Iowa.

Boswell won in 1996, and Patterson was invited to work for his Washington DC office, which is how a working-class Vietnamese immigrant from the Midwest found herself at the center of politics—all at 21 years old. She spent six years there, first as a congressional press assistant, then in successive legislative jobs for three congressmen.

After the events on Sept. 11, 2001, Patterson and her husband left DC, and she returned to the Midwest. She spent eight years as a legislative liaison at the Iowa Department of Public Health (IDPH). That advisory job yielded dozens of constituent-driven state initiatives, including a groundbreaking school-based dental screening program for kids still in effect today. In 2011, Patterson joined Delta Dental of Iowa.

Throughout her life, Patterson has experienced anxiety about her lack of policy knowledge and experience as she learned the ropes. But Patterson attributes her successes to her ability to say “yes” in the face of uncertainty and step up to meet opportunities. In the end, mustering confidence to take those calculated risks came from what her early mentors saw in her, rather than how she viewed herself.

“At the time I thought, these people are crazy,” she recalls. “There I was, in a state I wasn’t familiar with, working on issues I didn’t have any background in. How is a farmer from Iowa going to relate to this little Asian woman with a funny last name that they probably can’t pronounce?”

But the staff’s faith in her inspired her own.

“If you’re passionate and dedicated to learning about issues where you can have a real impact,” she says, “it works out. Being fearless is being resilient, especially for women. We doubt ourselves more, we tend to not take chances because we don’t think we’re good enough. I can deal with those moments because of the people who believe in me.”

Paving Her Own Path

It’s not lost on Patterson that her parents likely didn’t imagine the career their daughter would grow into. They were preoccupied, trying to give their children a good life.

“They were so busy just trying to get by, put food on the table, pay the mortgage,” Patterson says. “I saw that struggle every day. They didn’t have time to think about many of the things I think about. The gift my parents gave me is the ability to have a career where I serve others.”

Her parents’ narrow survival goals steeled Patterson’s resilience all these years, planting the seeds of her desire to help others. When she encounters inevitable hardships, that broader perspective kicks in.

“When I doubt myself, I think, I didn’t transplant myself from another country into an unknown culture and rebuild a life. If my parents can do that, I can get through this,” she says. “Nothing is as hard as what they did.”

Over her years running advocacy trainings at work, Patterson has learned that the vulnerability of asking scares people, so she strives to demystify it.

“Growing up, we’re taught not to ask for too much,” she says. “Be polite. In these shoes, you’re in a different role where you can ask. Legislators expect you to ask them for something. They want to know how they can help. Advocates are the bridge between what’s needed and possible solutions.”

Now nearing 50, Patterson is at ease with the power of asking, but feels she’s only scratched at the surface of what advocacy makes possible. Asked what her greatest professional achievement is, she laughs: “I don’t think I’ve reached it yet.”

After years of juggling competing work-life priorities—balancing career goals with family and raising her kids—she’s looking forward to where her next steps take her because she’s more focused on the journey.

“When you’re younger, you’re so driven to just get somewhere, you can’t think about what path you really want to take,” she says. “You’re just on a path. Today, I’m more in control of my path and can step back and figure out where I want to go next.”

That destination may be undetermined, but Patterson is certain of one thing: “I’m not done yet by any means.” And she’ll more than likely be helping others like herself along the way.

The University of Minnesota, the Iowa Department of Public Health, and Delta Dental of Iowa are not an affiliate of any company of the Principal Financial Group.