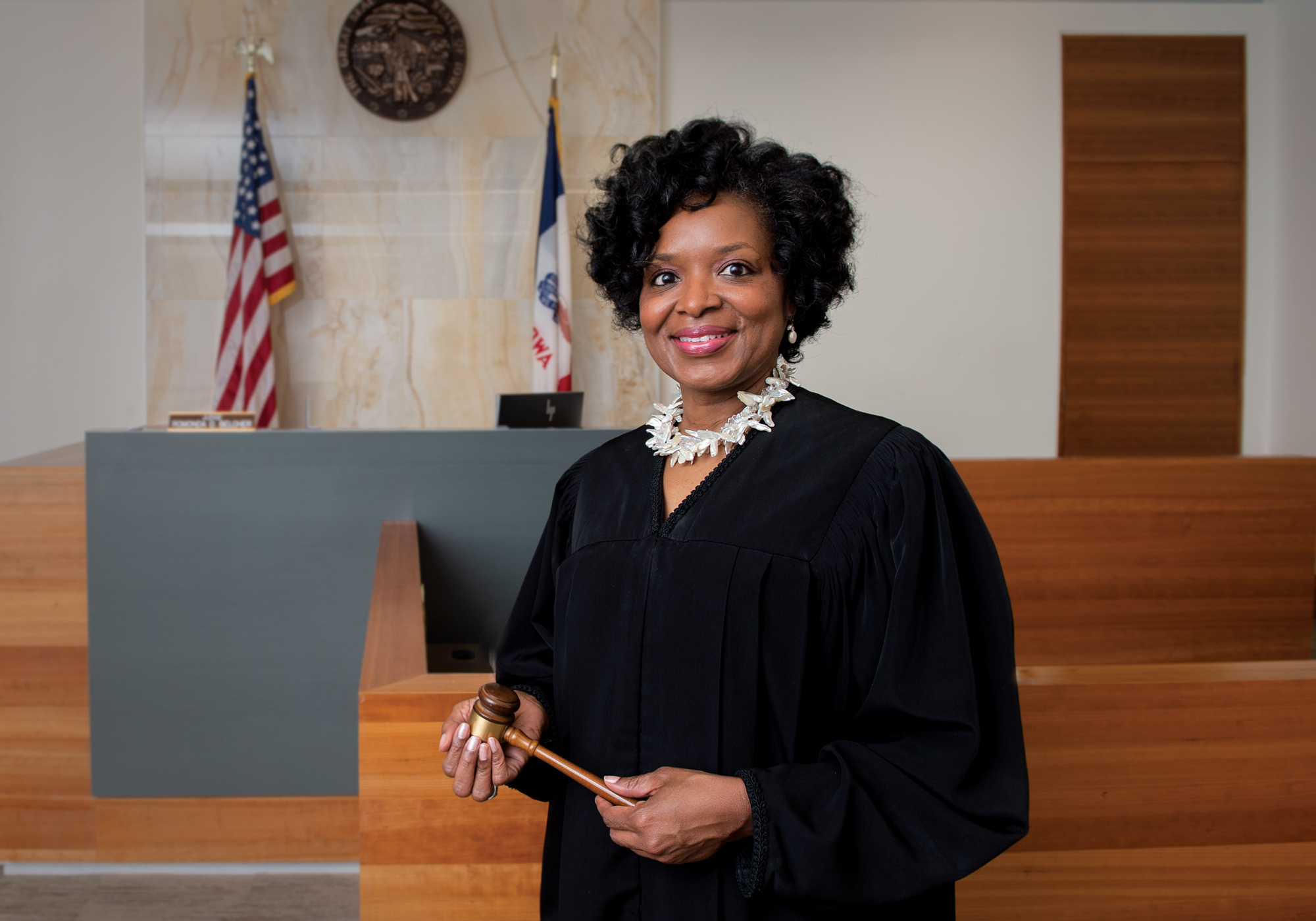 Romonda D. Belcher doesn’t know how she stumbled across her dream to become a judge — only that the calling came early.

“I didn’t know anything about law school or that I had to go to law school,” Belcher says. “Somehow, at a very young age, I believed judges were in a position to make a difference and ensure that people were treated fairly.”

That keen interest in justice may have been influenced by her early experiences in school. Growing up in the small town of Plymouth, North Carolina, Belcher was the second child of four, initially raised by a hard-working young mother who didn’t finish high school but instilled the importance of an education.

Belcher excelled academically and was usually one of a few Black students in the classroom. Shy and quiet, Belcher felt welcomed. She had a circle of friends she met through advanced placement classes. But Belcher also saw others weren’t treated with the same openness — whether because they looked different, weren’t as smart or lived in a different part of town.

Those observations, combined with her mother’s insistence to treat others as you’d want to be treated, cultivated a deep sense of fairness and compassion for Belcher. And that was all it took for her to catch the bug for justice.

Coming into her own

Belcher spent her undergraduate years at Howard University in Washington D.C. She was dependent on her mother as a teenager, and it was difficult to move more than four hours away. But she was also adamant in attending a historically black university.

“Howard University allowed me to come into my own,” Belcher says, “to be surrounded by other people who looked like me, with similar backgrounds, values and goals, who set an example and paved the way. It gave me the confidence I needed to believe in myself and built on what my mother and father had taught me.”

Belcher came to Iowa in 1992 and attended law school at Drake University on a scholarship. Despite Iowa’s majority white population, Des Moines’ pace and small-town feel appealed to Belcher. When another student asked Belcher how she was coping with the move, Belcher realized it was second nature to her: She had done it for most of her academic life. “I was used to being in a predominantly white environment,” she says.

The path to becoming an attorney, much less a judge, is long, but Belcher never lost sight of the judiciary as her end goal. Belcher attributes her persistence to her faith.

“Purpose is very important. I really believe I am walking in my purpose,” Belcher says. “When I learned that the meaning of my first name was ‘protecting hands, wise counselor,’ it blew me away because that embodies what I do and who I am. I knew I wanted to make a difference in people’s lives.”

Belcher realized her dream in August 2010, becoming the first Black female judge in Iowa. She considers it her greatest professional accomplishment as well as her greatest challenge. “I came from out of state from a small North Carolina town, I didn’t come from wealth,” Belcher says. “To realize my dream, even though it had never been done in the state of Iowa, is a great achievement. It’s also hard to do or be something no one has ever seen before. It’s a huge weight to carry to be the first at anything.”

The milestone didn’t come easily. The appointment came after 15 years at the Polk County Attorney’s Office. Belcher first applied to be a judge after six years as a prosecutor, mostly in juvenile cases, and was told she was too young and needed criminal and trial experience. Later, she was told she needed more civil law expertise. With each successive hurdle, Belcher was undeterred, moving into new positions within the county attorney’s office to gain the experience she needed.

That didn’t mean uncertainty and self-doubt didn’t creep in from time to time. But Belcher recognized the importance of self-reflection to get over those mental hurdles.

“Fearlessness is just being confident and assured in who I am and not allowing anything on the outside —the no’s, the naysayers, the negativity — to change who I know I am,” Belcher says. “I am enough. Everything I need is inside of me.”

Empathy on the bench

Today, after more than 10 years on the bench presiding over criminal and juvenile cases, Belcher still loves what she does — in part because she knows she can change lives.   “Being a judge is what I do, not who I am,” she says. “Who I am on the inside — my values, how I treat people, my character, my compassion — makes me the judge I am. I don’t just put on a robe and put on certain qualities. Who I am is who I am, with or without the robe.”

The people in Belcher’s courtroom — many of whom have experienced trauma, domestic violence, substance use, mental health issues, poverty, and lack of education and housing — need a compassionate listener, and Belcher is dedicated to providing that.

“The people I see are at their lowest. I may be the only face of the judiciary they see. I don’t judge them based on what brought them to court,” Belcher says. “I try to listen to not just why they’re there, but how they got there. … If I give them the opportunity to be heard, and treat them fairly, with respect, compassion, and encouragement, I believe I’ve made a difference.”

Walking the walk at home

Five years ago, Belcher’s empathy was put to the test in her personal life. After her youngest sister, Candie, was murdered in 2003, Belcher’s older sister, Cartaveta, looked over her two young children, then only 1 and 2 years old. At 15, the older of those two children, came out as transgender.   “My sister didn’t have the capacity to deal with that,” Belcher says. The rest of her family was equally ill-equipped.

Belcher has no biological children. The prospect of raising a teenager, much less one grappling with gender identity issues, was daunting. Nevertheless, Belcher knew it was important to help.

“It was impossible for me not to have the same compassion for my own family,” Belcher says. “I knew I needed to step up and say, ‘I will take that child here with me.’”

Belcher took on guardianship of her niece, who moved from North Carolina. “I wasn’t ashamed. I knew I had to be fearless for this child, to feel welcome, loved, and supported,” Belcher says. “What helped me get there was trying to understand how she felt when she looked in the mirror and saw something totally different than what was in the reflection.”

To surround her niece with love and to meet her needs, Belcher had to embrace a different community in Iowa. She found her niece a support group and found her own group as well. Belcher also called upon her existing community, and to her surprise, they stepped up. Friends, peers from work and her church community were supportive and welcoming, despite what their personal beliefs may have been.

Together, Belcher and her niece built a life that has worked for both of them. Her niece, now 20 and a sophomore in college, is thriving, following her dream to be a fashion designer. The extended family has also come around and embraces her, including Belcher’s mother.

Reflecting back on her leap of faith, Belcher says it comes back to that same inner resolve that has guided her throughout life. In both her personal and professional life, compassion and understanding have been the underpinnings of every decision.

“My desire to make a difference in my personal life is really no different than it is in my professional life,” she says. “In hindsight, there was no other decision for me to make.”

Howard University and the Iowa Polk County attorney’s office are not an affiliate of any company of the Principal Financial Group.