The Search For Belonging: San Wong 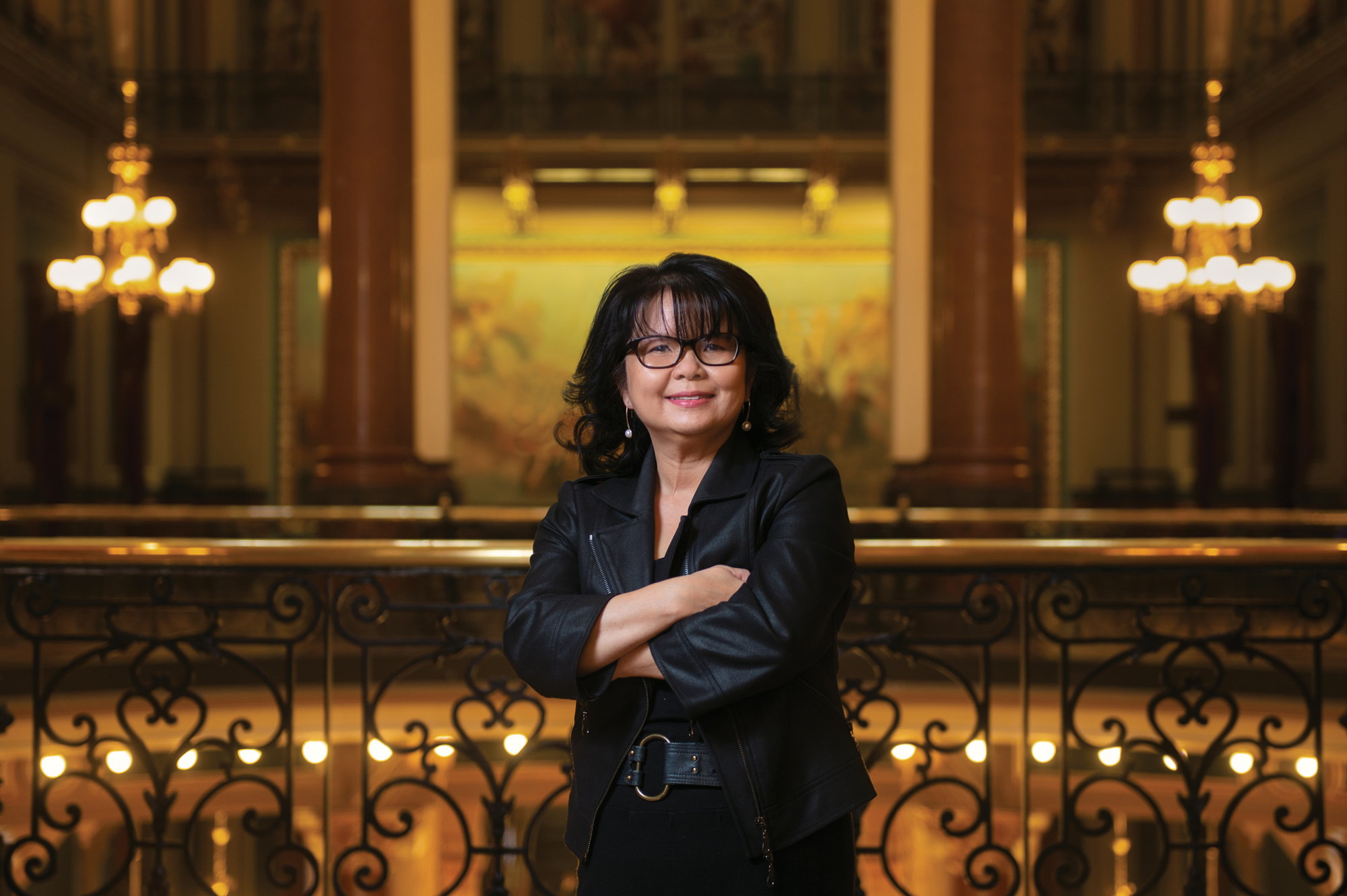 In 2009, San Wong’s husband Steven died of a sudden heart attack a week before Christmas. Their twin sons were only 11. Not long after, everyone began asking San the same question.

Her friends in Des Moines, asked, “Are you going to stay here? Will you go home?”

Her family in Singapore asked, “Will you come home?”

It was a reasonable question. Without Steve, San’s two children were now her only family in the United States. The real question was: Where was home?

Born in Malaysia, San had spent early childhood in a multigenerational home with her parents, two sisters, grandparents, aunts, uncles, and cousins. However, after San was in kindergarten, her father moved the immediate family to Singapore for better educational opportunities. The ethnic demographics of the two places were similar and only eight hours apart by car. Nevertheless, the smaller family unit was a change, and the move precipitated a lifelong quest for San—for belonging.

“I spent my formative years in Singapore. But early on, I never felt like I was from Singapore. When I lived in Singapore, I was from Malaysia because all my relatives were still in Malaysia. My whole life, there’s been that sense of ‘I don’t really belong anywhere,’” says San.

San would encounter that feeling again. In 1984, her family made a bigger move to Nebraska. Her father, whose job in Singapore was similar to school superintendent, was given a chance he never would have had at home: to get his bachelor’s and master’s degrees at the University of Nebraska at Omaha. San was 18, so she ended up going to college at the university at the same time.

After San’s father earned his two degrees, the family returned to Singapore. San stayed in the U.S., pursuing a master’s in business administration and industrial/organizational psychology at Kansas State University, where she met and married her husband Steve. Work brought them to Iowa: first to Ames, where Steve, a research scientist, got a postdoc position and San became an academic advisor at Iowa State University, and then to Des Moines, where San got a job overseeing student services at Des Moines Area Community College (DMACC).

Steve was from Iowa, but that wasn’t why he and San moved there. “That’s just where the job was,” says San.

Interestingly, San didn’t pursue U.S. citizenship for a long time after her marriage. She and Steve thought moving to Singapore was just as likely, and her citizenship would make that easier. Then they had the twins, and the family settled in where they were.

Faced with being a widow in her 40s raising two boys on her own, however, San had to reconsider the question of home differently. The answer wasn’t what she thought.

“When Steve died, my world almost fell apart,” says San. “But people here completely put their arms around us. My boss and mentor, Dr. Mary Chapman, a widow herself, was very understanding and really helped me get back on my feet. A good friend who was an attorney helped me deal with everything legal—the house, all of that. My neighbors would pick my kids up and take them to school. Their instructor picked them up for tae kwon do. Everybody in our lives rallied around us and made sure we were okay.”

Today, San tells people, “That’s when I found home. That’s when I made that choice and said, ‘I’m staying here.’”

By then, the U.S. had been home in practical terms for over 25 years, too. If San had any ambivalence about staying, visiting Singapore that first summer without Steve quelled them.

“For one fleeting moment, it felt so good because my whole family came home from all over the world. But that’s not what it would be like if I moved there,” says San. “I could tell: This is where I’m from, not who I am now. I was 18 when I came to the States. I’ve spent my entire adult life here. Everything I learned about what it means to be part of a community, I learned here.”

By the time of Steve’s death, San had been thriving in her work at DMACC for 14 years under Mary Chapman’s guidance—first as Associate Provost, and then as Director of Workforce & Education Initiatives, which incubated new outreach programs catering to specific populations.

“Mentorship is not creating a version of yourself,” says San. “Mentorship is helping someone create the best version of themselves. It’s what they need, not what you need. It’s listening to what kind of leader they want to be.”

Mary recognized that potential in San before she herself did.

“The stereotypes of Asians don’t scream ‘leader,’” says San. “I’m a small, Chinese woman who looks young. But Mary saw something in me and put me in charge. She introduced me to everyone. Everyone knew I had her backing, which made a big difference. Mentoring is about opening doors for others. That’s what Mary did for me. Whatever success I attain, Mary will always own part of it,” she says.

San’s sense of not always belonging even helped her on the job. Located on the bus line north of downtown Des Moines, DMACC served the community’s most disenfranchised, which aligned perfectly with San’s values. “If the campus wasn’t where it is,” says San, “most people there wouldn’t have any opportunity for higher education. The work was to make DMACC a safe place for people with multiple barriers who are looking at education to change the condition of their lives. Because until you feel safe, you can’t learn.”

When interviewing new advisors for her department, she underscored what they needed to do for students beyond providing guidance: “This group of people has been disrespected a lot. They know disrespect. If they don’t feel respected, you won’t be able to help them. Show them respect. Realize what they’ve overcome to walk through our doors and be here. Students need to know we’ll hold on to them until they’ve accomplished what they came to do. That doesn’t always work out—because they have lots of challenges—but we will do our best. Other things may intervene that get in the way of them being successful, but we won’t be one of them.”

So why did San leave DMACC for a less secure, politically appointed government job about a year after her husband’s death? Ironically, it was the same stability and nurturing environs that had made her remain in Iowa.

“I was restless,” says San. “I loved the work, but I wanted to shake things up. I knew DMACC so well, it allowed me to focus on myself a little too much. I wanted to be consumed at work, not have time to think about being a widow, all the loss.”

San thought about volunteering, to do something to get out of her own head. Then a friend with government connections recommended San apply for the state leadership role as Director of the Iowa Department of Human Rights just a year after Steve’s death. The job was a long shot, so San didn’t think too hard about it initially. But the interview process went well, and a month later, San was appointed.

San laughs, recalling her friend’s words before her final interview. “He said, ‘You know, you can’t say “no” to the governor if he offers you the job.’ It was such a whirlwind, I’m not certain I was sure. I’m usually cautious. But the quickness of it was good for me, to be in a situation where I had to leap without knowing the consequences.”

The governor’s vision to transform the Department of Human Rights into a hub of opportunity and access assuaged San’s doubts. “He said, ‘I want you to bring vulnerable people closer to government.’ That clinched it. Regardless of the day to day, that’s the real job. I took that to heart, and it’s been wonderful.”

After nearly ten years, San’s work of expanding government’s capacity to reach the most vulnerable remains meaningful. No two days are the same, and even the pandemic’s inequities haven’t dimmed her belief in the mission. “No matter how dire the issue, so many people come together to see how we can solve it,” says San. “Government gets a bad rap because it’s bureaucratic, but these dedicated people give up a lot to be of service to others because they believe in the work—especially now, when the emergencies we manage, like people being unemployed or hungry, require higher collaboration. They find common ground, and the things they’ve accomplished are amazing. That fills me with a lot of hope and optimism.”