Regional models for maternal health care can be successful, but Iowa doctors say an intentional effort is needed to reach the entire state

Editor’s note: This is part three of a three-part series focusing on the closure of birthing units in Iowa, the factors driving the trend and how it is changing maternal health care in Iowa. Part one introduced the problem. Part two analyzed two closures – the Jefferson County Health Center’s birthing unit closure in Fairfield in 2000 and the UnityPoint Health-Marshalltown birthing unit closure in 2019. This part looks at potential solutions to the issue.

Fairfield, Marshalltown and dozens more cities are working through birthing unit closures and the effects of Iowa’s shifting health and economic landscapes.

And rather than having every community work independently on the same challenges, Dr. Stephen Hunter, co-director of the Statewide Perinatal Care Program, said an effort is needed that connects the whole state and recognizes how changes in one community after another quickly become systemic.

Hunter said traveling providers are an important resource in communities without a birthing unit. But if the trend of closures continues, it can contribute to having even fewer providers and would place the onus on the remaining workforce to deliver access to care to more of the non-urban regions of the state.

In order to adapt to the consolidation that’s already occurred in Iowa’s health care industry, he thinks a “hub-and-spoke” model will be the way forward for Iowa. It resembles the model that areas like Fairfield and Marshalltown are already using, but is filled out more to close any gaps.

Hubs would be located in city centers like Des Moines, Iowa City and Ames and be responsible for deliveries in their areas, Hunter suggests. The spokes would then provide the network of prenatal care to rural communities, preventing out-of-town trips once a month or more, depending on the high-risk nature of the pregnancy.

Implementing a system like this would mean transformation for every part of the state, but in a way, Iowa has its hubs already formed. It’s the spokes that need work.

The unit had also averaged around one birth per day for the last five years, which Stephenson said was due to having three birthing units available in downtown Des Moines, all within one and a half miles of each other.

Dr. Perry Osborn is the medical director of the new Maternity and Infants’ Care unit at MercyOne West Des Moines Medical Center, and he said the opening of both the MercyOne hospital and Methodist West in 2010 was “a shock to the OB system.”

Adding two new units to the existing four in the metro area made it more difficult for OB-GYN groups to incorporate both of the new facilities into their practices.

“Groups were usually trying to decide which system they were going to use on the west side. Nobody used both,” Osborn said.

He was practicing at the MercyOne hospital downtown at the time, but he said the unit in West Des Moines averaged around one birth a day, which made the facility less attractive for local practices and ultimately led to its closure in 2016.

The MercyOne unit now provides Level 2 care, meaning it is equipped to handle moderate to high risk conditions and deliveries of babies 32 weeks or older.

A neonatal intensive care unit and 24/7 neonatology services were also added, providing features the previous unit did not have, and a layer of comfort that Osborn said parents had been hesitant without.

Murphy said just seeing that a hospital is capable of handling complications gives parents peace of mind, whether they have a higher-risk pregnancy or not.

Since the opening in December, Murphy estimates he has seen 10% to 15% of patients coming from outside Polk County. Stephenson said the number of expecting parents coming to UnityPoint hospitals from outside Des Moines for standard or high-risk care has grown since 2010, and in the last five years, the rate of emergency transfers from hospitals around Iowa has picked up significantly.

He said Iowa needs to make efforts to close the gaps left by an unorganized pattern of closures.

“Right now many of the closures are somewhat random in their geographic locations,” he said. “If you look at the last 10, 15 years, seeing a steady wave of closures … it’s really not in a planned, systematic way that [a] region leaves.”

Hunter, vice chair of obstetrics at the University of Iowa Hospitals and Clinics, is one doctor spearheading those efforts with the help of the five-year, $10 million State Maternal Health Innovation Program grant awarded by the Health Resources and Services Administration in 2019.

He along with University of Iowa obstetrics and gynecology faculty and staff from the Iowa Department of Public Health will work to craft a maternal health care network that is organized, interconnected and forward-thinking.

The team is developing six initiatives:

The University of Iowa’s five OB-GYN residency placements grew to six this year, and two spots are reserved for residents on the rural track. With 60 applications for this year’s spots alone, Hunter said he thinks the spotlight on rural disparities is driving the higher interest.

Hospitals have also started using the simulation equipment to train for emergency obstetrical cases, preparing facilities without birthing centers to stabilize a patient while coordinating transportation to another hospital.

Hunter said these initiatives and the increased public attention can mark the beginning of the end of Band-Aid solutions and maternal health issues flying under the radar.

Until something becomes enough of an issue, he said the short-term solution is typically more popular.

“Unfortunately, I think that’s always true. Not just this, but most problems are first addressed in that manner,” he said.

The population shifts that Iowa has seen over the last 20 years are changing how the state operates, and require that its systems adapt.

Hunter said he knows some birthing units that are “hanging by a thread,” but he hopes time and dedicated partnerships that prioritize collaboration over competition will lead the state further and further away from its precarious position.

RELATED: Could maternal-fetal telehealth be one solution to keep more birthing centers open in Iowa? 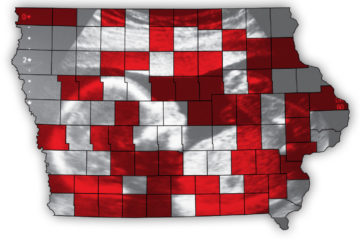 By Sarah Bogaards, Business Record staff writer Editor’s note: This is a three-part series that focuses on the closure of birthing units in Iowa, the factors driving the trend and how it is changing maternal Read more…

Could maternal-fetal telehealth be one solution to keep more birthing centers open in Iowa?

By Emily Barske, Business Record editor The idea to convert some in-person maternal and fetal medicine clinics to telehealth visits had been percolating for a while. But it was ultimately a blizzard in February that Read more…

Two communities share the experience of closing their units and how they adapted By Sarah Bogaards, Business Record staff writer Editor’s note: This is part two of a three-part series focusing on the closure of Read more…