Women have long begged for flexibility, paid family leave and equal pay from their workplaces. Post-2020, companies are starting to listen.

For decades, women have generally worked in environments designed by men, for men.

Standard office temperatures are based on the metabolic resting rate of a 40-year-old man. Mandatory meetings are often scheduled at the same time as school dismissals. There are often no designated spaces for lactation. There isn’t federally guaranteed access to paid leave after having a baby.

Even the concept of the 40-hour workweek was designed for men with the assumption in mind that they had wives at home to manage domestic responsibilities and raise the children – not with the scenario of both parents working out of the home, as is common now.

For the first time, in 2019, women made up half of the American labor force. Then in 2020, millions of women dropped out of the workforce to the point where the women’s labor force participation rate was at a number not seen since the late ’80s.

As employers continue the quest to usher people back into the workforce and into the office, experts are sensing a turning tide in the way leaders think about what the modern workplace could and should look like.

After 2020, companies have dramatically shifted policy priorities, as illustrated in Lean In’s 2021 Women in the Workplace report. Some examples:

In our inaugural workplace benefits survey, the Business Record took a look at what some Iowa businesses and organizations are doing to support their employees at and outside of the workplace.

What must be done to help bring women back into the workplace and keep them there?*

Clear themes emerged from the 71 responses. Almost all of them mentioned flexibility, access to child care, fair and adequate pay, or paid family leave. Other respondents mentioned that a recognition for their work would help.

What perks or benefits do you look for in a workplace?*

Of the 64 responses, the most common answers were flexibility, health care benefits, child care support, a solid retirement plan, paid family leave and a respectful culture where their work is valued. When we asked Megan Milligan about the benefits and policies in place at the Iowa Center for Economic Success, she said, “We have really, really high expectations, but we give all the tools and resources the employee needs to get there. … We compassionately usher you through our very high expectations of you.”

Does your company have flexible work policies?

While many jobs, including food service, manufacturing and retail, cannot be done from home, flexibility is often listed as the No.1 policy that companies should continue to implement post-pandemic if they want to retain employees. But some experts worry that remote work will hold women back. One scientist referred to a bias favoring those who are in the office, which may keep remote workers from getting promotions and stepping into leadership positions.

Arguments in favor of having the same amount of leave available for both birthing and nonbirthing parents say that doing so helps set a precedent that parenting a child shouldn’t just fall on one person. Arguments against it say that the birthing parents deserve more time to recover physically.

How many weeks of paid family leave do you feel parents should be entitled to?*

Policies listed by respondents varied widely. Some mentioned policies where the birthing parent is partially paid for six weeks. Some respondents said their employers’ policies were tiered, where the longer you work at the company, the longer the leave you get. Other responses said it’s covered only through disability insurance or by using sick leave.

Does your company offer bereavement leave?

Bereavement leave is a common benefit that many companies and organizations offer. Most of the responses in our survey mentioned a range between two and five days off for an immediate or extended family member’s death.

New to the national conversation around bereavement leave, though, is adding a loss of pregnancy to the list of eligible situations. Between 10% and 15% of known pregnancies end in miscarriage, yet there’s no federal requirement to provide paid time off after pregnancy loss. Last year, the Waterloo City Council and Kum & Go were two Iowa organizations that added pregnancy loss in their bereavement policies.

Is access to mental health covered under your company’s health insurance plan?

Does your company offer fertility benefits?

Roughly 1 in 8 couples are known to struggle with infertility. Coverage of fertility benefits is growing throughout U.S. companies, though the range of what’s covered varies. Some companies offer stipends for egg freezing or IVF treatment while others simply cover appointments with specialists. As mentioned in a recent Fortune article, more companies are considering adding fertility benefits to their repertoires in an effort to attract and retain employees.

There’s no silver bullet to solve the gender pay gap or pay inequity. But experts agree that the best way to address the issue is by talking about it and acknowledging that it exists. Many experts believe that pay transparency policies would help. In a previous Fearless article, University of Iowa professor Beth Livingston argued transparency is useful for promoting equity in workplaces. “It provides a check on manager actions and pay decisions, while also demonstrating trust in employees. … Research has shown that pay transparency can actually improve employee motivation! When the process and outcomes around compensation are clearer, employees may actually perform better while simultaneously promoting equity and requiring companies to think through their compensation decision-making in more depth.

Does your company have pay transparency practices or policies?

In 1997, Congress first introduced the Paycheck Fairness Act, which would ban employers from asking about salary history, require employers to prove why pay disparities exist and bolster legal protections for those who file sex-based wage discrimination lawsuits or class actions. It has passed every year in the House since 2010, but never in the Senate. That leaves private companies and organizations to set their own practices and policies. In organizations that fall under the umbrella of the state or municipal governments, compensation is public record.

Some examples of practices and policies around pay transparency included:

When your company posts a job opening, is a salary or wage range included in the post?

In recent years, several states and cities have passed laws that require employers to post salary information for job openings, promotions and transfer opportunities. Research shows keeping salaries secret disproportionately harms women and people of color, who are less likely to negotiate base salaries and raises. Another argument for doing so is that it saves time by weeding out applicants whose salary expectations don’t match up. “I don’t want to have someone spend the time and energy applying if we aren’t able to offer what they are looking for or need,” Sarah Noll Wilson said.

Does your company offer retirement benefits or a 401(k) match?

Women experience many barriers when it comes to saving for retirement. On average, women earn less over the course of a lifetime than men. Gaps in employment for mothers who have to take time off to care for children affect earning potential – one study found that for every child a woman has, her income falls by an average of 4 percentage points.

Retirement benefits described in our survey varied. The most common responses were companies providing a 2% or 3% match to 401(k) plans. Other companies put limits on matches; for example, the company would match 100% up to 6% of an employee’s contribution. Another respondent indicated they’re part of an ESOP company, so they receive shares each year in their company’s stock.

Does your company offer free or low-cost professional development opportunities?

Whether formal or informal, participation in professional development opportunities is crucial for advancement. Many formal trainings or conferences can come with a price tag of hundreds or thousands of dollars, causing a barrier to access if an individual can’t attend on their employer’s dime or afford it themselves.

Does your company offer affinity groups for underrepresented employees?

Affinity groups, also commonly called employee resource groups, are organized communities of employees within a workplace who share identities, whether gender, ethnicity, religious affiliation, ability or lifestyle. They exist to provide support and foster a safe environment where people can bring their whole selves to the table.

On why she implemented the policies and benefits that the Iowa Center for Economic Success offers: “The base of any benefit we offer is, ‘What is real life?’ How do you legally, equitably manage that in a way that you get the work done and you’re good stewards of the dollars and revenue that comes through your door, but also that your employee feels like they’re a part of the mission, not just a cog in the wheel to get a certain outcome done? … I think the reason I wanted to be a boss was to make sure that other people had access to [the benefits]. I don’t particularly like being a boss, except that I know I can make normal expectations for people. … People are working harder than ever. You just have to give grace alongside high expectations.”

On why she’s working to remove gender differences within the language of benefits and policies: “I did not experience any gender differences in my own life in terms of discrimiantion or things I couldn’t access until I had children. That became the great divide. … For me, my cause was changing the word ‘mom’ to ‘parents,’ and starting to proactively raise up the fathers. … Until you start treating dads a certain way at work, you’re not going to get moms to be treated a certain way. I sat with my co-workers the other day and asked, “What benefits do we offer or do we need to offer that are just for women?” We couldn’t come up with any. Someone said, ‘miscarriage.’ Well, we should be telling the dad to take some time off, too. They said, ‘What about infertility?’ To that I said that they should go together to the clinic. We’re trying to un-genderize. If we’re not doing that, then we’re leaving a whole other group of people out because there are people who are gender-fluid or don’t identify with a gender. … We have to start acting like where we want to get to. If where we want to get is total equality and equitable workplaces, let’s just start there.”

On why she hates the term “work-life balance”: “We treat our employees like people who have lives outside of our office and recognize that those lives are happening simultaneously to when they’re at work. … When did my personal life become one thing and my job another? A lot of us are lucky enough to pursue careers that are part of my identity. My job is also my hobby. It’s my social hour. It’s how I learn. It’s how I get away from my children. So why did they become two separate buckets that we have to segregate? It all overlaps.” 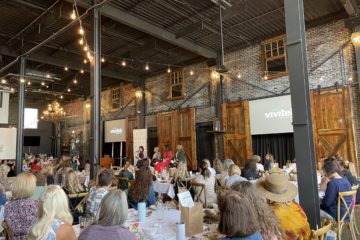 By Emily Kestel We’ve all been to business industry conferences where schedules are packed-to-the-gills with sessions on strategies, innovations and words of wisdom.  The first-ever FemCity Des Moines Beyond Business Conference went, well, beyond that. Read more… 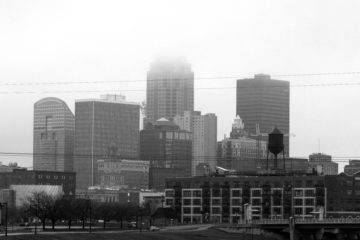 Women-led businesses more likely to offer caregiving benefits as a result of the pandemic, survey says

By Emily Kestel, Fearless editor Call it what you want – a “labor shortage” or a “reassessment of work in America” – but companies are finding that in order to attract and retain current employees Read more… 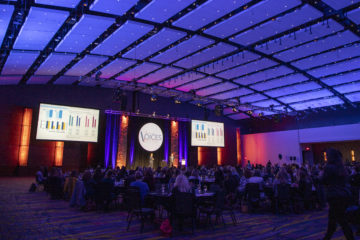 By Emily Kestel, Fearless editor The theme of this year’s Women Lead Change Central Iowa Conference was “Joining Voices: Leaders for Equity.” One way I like to practice equity is by sharing knowledge. In this Read more…