Diversity and Inclusion as a Way of Life: Miriam Lewis 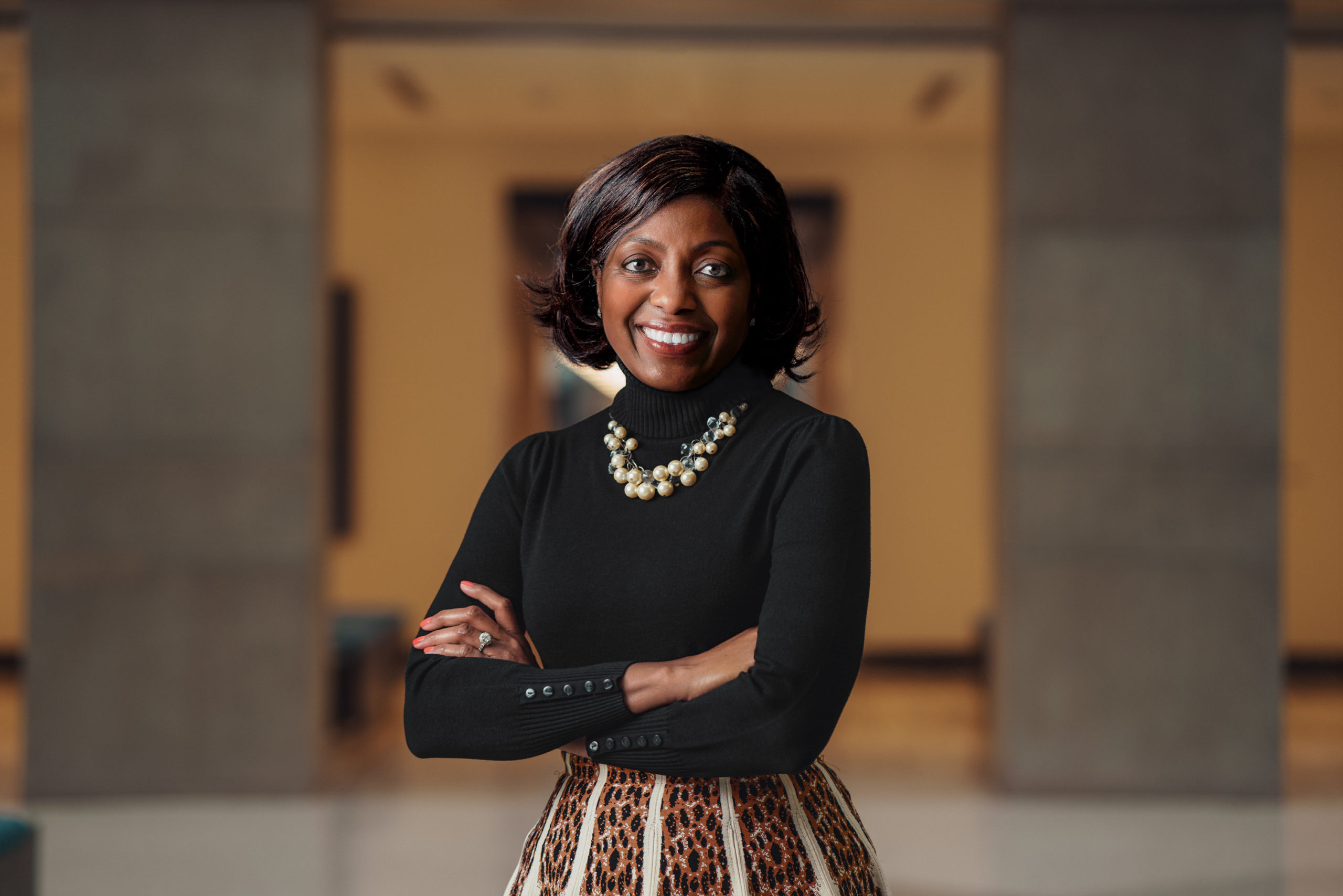 Miriam Lewis was ready for something new. From her earliest gig at a small financial services firm, to other Citigroup subsidiaries, she’d always been hungry for a fresh puzzle to solve, new things to learn, a challenge that felt bigger than herself. Her husband Ray, of 27 years, was at the same point in his career.

That may explain why, on a warm summer morning a little over a year ago, this smart, ambitious black woman from the South, with decades of corporate leadership experience, held hands with Ray across the seat of a car bound to visit family in Mobile, Alabama, and together they decided to move to Des Moines, Iowa.

Lewis had received a job offer from a company called Principal and it sounded like the kind of challenge she’d been looking for.

“My whole career has been this series of leaps, and this one would be the biggest yet,” Lewis says. “Ray always supports me, and he was the one to say it first: This is right for us.”

It would be the next step in a career driven by an adventurous spirit and Lewis’ inclination to try almost anything, at least once.

“I sought out whatever would help me get a new skill set,” Lewis says. “My philosophy has always been that going broad is more important than going deep.”

Getting People Where They Need to Be

Laughing about her eclectic professional experience, Lewis acknowledges that a willingness to relocate was among her smartest career decisions. “I’ve relocated nine times,” she says.

That openness differentiated Lewis from her peers as she earned roles of increasing responsibilities across Alabama, Florida and Georgia within the financial services industry. She later held leadership roles at Clorox and Coca-Cola.

Helping people had been a defining force for Lewis since childhood. Born and raised in Mobile, she was the youngest of six. Her father died when she was only two, leaving her mother to raise six daughters as a single parent. As strong as her mother was, the help of her extended family was essential. “It truly took a village to raise us all, and I depend on those relationships to this day,” Lewis says. “That’s probably why I love to help people, because we were helped so much.”

That same desire to help people prompted Lewis to jump into the diversity and inclusion (D&I) space, a human resources field that accelerates growth for individuals and helps companies thrive. But first, she needed enterprise-wide experience outside of her supply-chain expertise. Under the guidance of her mentor, Lewis took on relevant projects outside of her day job that helped her build her D&I muscles bit by bit.

“Excelling in my day job and taking on additional assignments and sponsorship,” Lewis says, “equipped me for the important diversity and inclusion work I do today.”

Finding and Using Her Voice

Despite her upward career trajectory, however, Lewis struggled with using her voice in public for years. When she had to speak in meetings, she felt awkward and self-conscious, more at ease behind the scenes. Then several years ago, one of her best friends asked her to speak about managing finances at a women’s conference in Mexico. She stepped out of her comfort zone and accepted the invitation, despite having no formal training, just her own personal experiences.

Lewis was nervous when it was her turn to speak. “My legs were shaking so hard, I had to put my hands on them to hold still,” she says. “But I took a deep breath and stepped up. I shared some practical habits I use to manage my own finances. And—I received a standing ovation.” Since then, Lewis has stepped up to the podium often, she’s spoken to audiences exceeding 300 people.

When Lewis finally started to speak up with confidence, people listened. They even reinforced her perspectives, which made her feel more valued and empowered.

Today, Lewis models that boldness for others. “Sometimes I’m the only one in the room with a different perspective. I’m very comfortable sharing that, and in making mistakes and learning from them,” Lewis says. “I come from the school where either you win or you learn, so there’s no losing.”

With that attitude, it’s no surprise that she ended up in D&I work that orbits around helping employees cultivate and share their ideas.

“The key to harnessing the power of D&I is celebrating differences, not merely tolerating them. Diversity is everything that I am and everything that I’m not,” she says. “That’s what makes me dependent on other people. They have the things that I’m not. It makes us better together.”

Similarly, Lewis sees inclusion as a deep sense of belonging.

“It’s feeling you can be your authentic self while at work,” Lewis says. “When you have that, you have the license to bring your ideas to the table and can focus on the business itself—because you’re not thinking about covering up. That’s how companies get the best out of every employee. Different backgrounds and ideas lead to innovations and better outcomes and solutions for customers.”

Diversity and inclusion are more than a job for Lewis. They’re a way of life. “Inclusion is linked to everything I do. It’s who I am. I don’t get to check it at the door at home or leave it at the office,” Lewis says. “At work and with my family and friends, I’m usually the one to bring everyone together, to consider other opinions, and ask, ‘What are we missing here or inviting others to say more?’ It’s also about listening, to what’s being said and what’s not being said. In an inclusive environment, only goodness happens.”

The corporate world is finally catching up to Lewis. Workplaces now hire with an eye toward building diverse teams and promoting inclusivity. The bigger challenge is in ensuring that the D&I investments companies make are meaningful and sustainable, not just superficial.

Fearlessness, With No GPS

The authenticity of her commitment explains how Lewis landed at Principal, one of the biggest employers in a state that isn’t known for diversity.

The return to financial services piqued Lewis’ interest because of its focus on helping families during critical times—after the loss of a loved one, sending a child to college, saving for retirement.

But it was Principal’s offer to integrate their D&I work into a business model that sold her.

“That made me grab my phone and type in Where is Des Moines. I’ve spent the majority of my career as a business leader. It’s rare to see jobs for inclusion roles that reference a business background coupled with diversity and inclusion experience. And Principal’s did,” Lewis says. “I knew at that moment that Principal understood: This work must be tied to the business, so you can make meaningful progress. It takes business leaders to sustain this work. Inclusion isn’t a human resources initiative. It’s a business imperative.”

Principal’s leadership reflected that same business imperative. Women have sat on Principal’s board for nearly 50 years, and the board has reflected ethnic diversity for 20 years. “Many companies are doing those things for the first time now and celebrating themselves,” says Lewis, “but Principal has been walking that walk for decades.”

Since that summer morning in the car with Ray, Lewis and her team, along with employees and leaders, have been hard at work knitting D&I best practices into the way Principal does business—from customers, processes, and its workforce, to its corporate responsibility practices.

“People may think of being fearless as an instant achievement,” says Lewis. “That’s not my testimony. For me, it has been taking one step at a time. No GPS. No details. No blueprint. Just doing my best and trusting that when I get to the next step, I’ll know what to do, and I’ll learn along the way.”

Principal is fortunate you took the leap, Miriam. While D&I is a business issue, your patient and caring approach shows it’s a human issue too. Best wishes!

Miriam Lewis this was such an encouraging article! I especially love your statement “I come from the school where either you win or you learn, so there’s no losing.” So many times we think if we didn’t win that we actually lost! I will begin to think like you and realize that even if I didn’t win, I still learned something along the way therefore i never lost. I wish you continued success in you career Queen! Thanks for sharing your wisdom! I think I’m ready to be more “Fearless”!

I am so happy and proud of Miriam Lewis. She will add value to Principal with her insight, knowledge, and sensitive.

Miriam I pray that you will always keep the Lord in front of you and He will always direct your path. Blessings to you and your family! Much love 💕

I am proud of my classmate and the leaps and bounds you are making in tgis area. In the words of another “Ray”, Des Moines, Iowa & D&I…”you got the right one baby, un-huh”.