Bringing her full self to work: Munirah Khairuddin 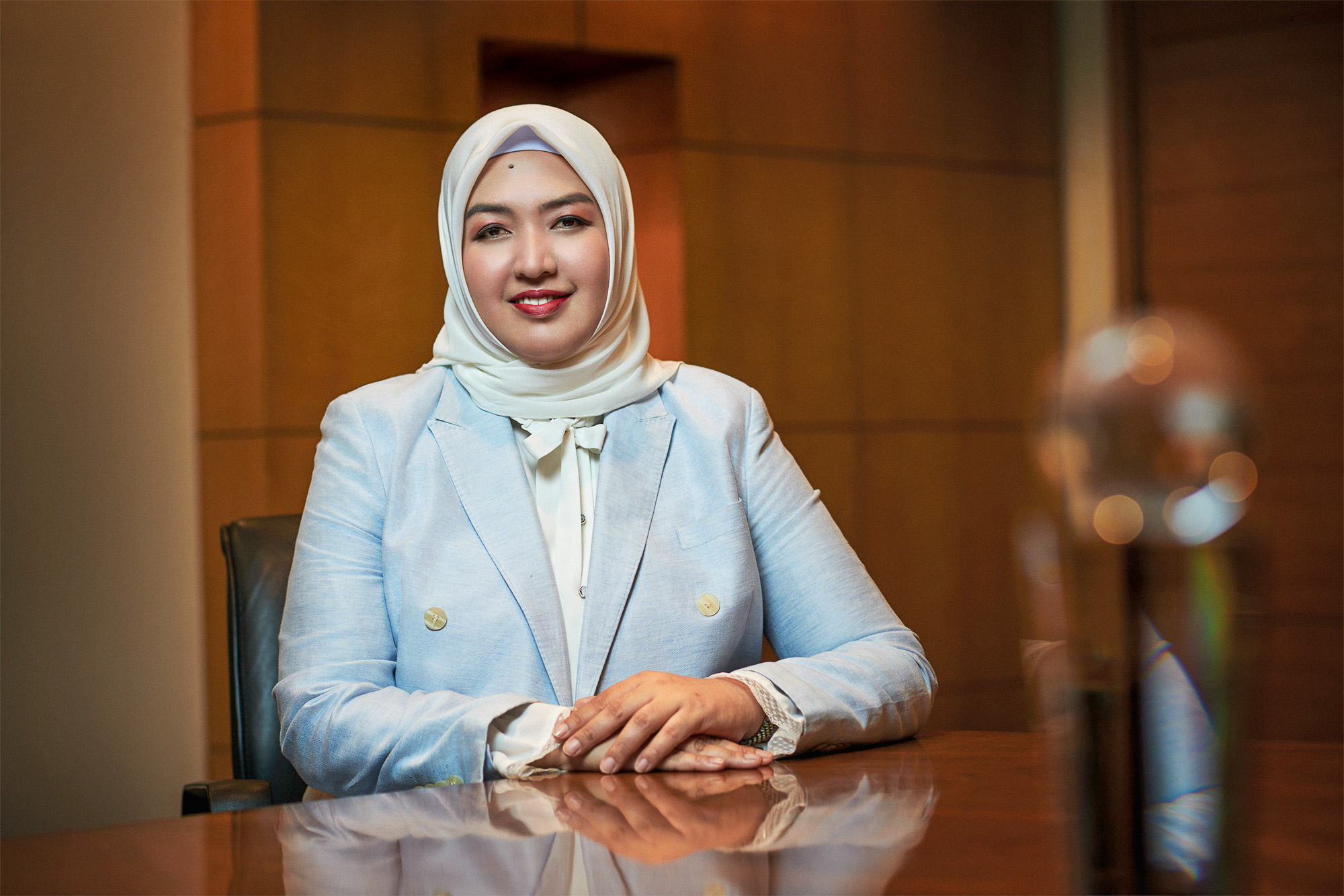 If anyone had told Munirah Khairuddin at 12 where she would be at 45, she wouldn’t have believed it.

“I wanted to see the world,” Munirah says. “Malaysia wasn’t enough for me.”

Today, she has seen the world. She’s also living in her home country of Malaysia, married with four young sons, choosing to wear the hijab at home and as the CEO of Principal Asset Management Berhad, one of Southeast Asia’s largest asset management companies.

In the end, the person she’s become was a far more important destination.

The Road to Bigger Things

An only child, Munirah was raised in Malaysia by a disciplined, corporate financier mother and an idealistic “dreamer” father.

“My father’s ethos was that we should always try to do bigger things,” Munirah says. After years working in bureaucratic jobs, he launched his own business.

Sometimes her father’s ventures were successful, sometimes not. Nevertheless, his tenacity inspired Munirah to let her dreams guide her. “What’s the worst that could happen?” she says. “So you fail. You just get up and finish the race.”

That conviction fueled Munirah’s ambition. Singled out for academic potential as a young student, Munirah was admitted to Malaysia’s top boarding school. At 17, she won a scholarship at Newcastle University in northern England.

But first, Munirah wanted to travel. Short on money, she asked her mother to help her buy a ticket to the United States to stay with her cousin. Her mom was dubious about a Malaysian teenager traveling alone.

But Munirah held firm, intent on visiting Los Angeles “to see what the U.S. is all about,” she says. The trip gave her a taste of the future she wanted. For 10 years, that future was outside her home country.

“The minute I was in the U.S., I knew I didn’t want my wings to be clipped—I could fit in anywhere,” she says.

Up the Corporate Ladder

At her father’s urging, Munirah used her twenties to learn all she could. She studied hard in the United Kingdom and met the man she’d eventually marry.

“I was chasing a career, so we dated for seven years,” Munirah says.

That chase led to jobs at PETRONAS, then a portfolio-manager position at Rothschild in London. “I’m very self-aware,” Munirah says. “My approach was to grab whatever opportunity I could.”

Even so, a traditional organization like Rothschild was tough—she’s female, Asian, Muslim, and was of ordinary socioeconomic status compared to her London peers.

“Rothschild toughened me up. Everyone went to Eton, or Oxford, or Cambridge, and I didn’t. I wasn’t the smartest or the most socially privileged,” Munirah says.

The confidence she projected only became real with the practice of emphatic hard work. For years, she rose early and arrived first at the office to get a jump on the day. Her discipline led to quick success.

By age 28, she was a part of a Rothschild award-winning team for emerging markets in London.

Then, Munirah received the call that changed everything.

It’s been a long time since you’ve been home, her father said. She and her fiancée had been dating long enough to make him wonder if they’d considered settling down. He then asked the biggest question of all: Do you plan to come back?

Munirah’s answers were predictable: She loved her job. Coming home probably wasn’t in the cards. Her boyfriend was fine with waiting.

But the conversation stuck with her. Her father rarely asked for anything. “I could just hear in his voice that he wanted me back,” Munirah says. “I later found out his health wasn’t good.”

Munirah was keenly aware that leaving Rothschild was potentially stagnating. Her career in emerging markets depended on staying in London.

And yet, the thought began to nag her: I want to be home.

Despite her misgivings, she returned to Malaysia.

Initially, the move was the career detour Munirah feared, just not in the way she thought. Before leaving London, a colleague had warned her, “When you go home, Munirah, you’ll be 10 years ahead of everyone else.” She’d been incensed at his presumption, but he was partly correct. Capital markets in New York and London were more advanced, so Munirah’s knowledge enabled her to accelerate on multiple fronts—returning home, getting married, having a baby, all while moving up professionally.

Doing multi-billion-dollar swap deals was easy and satisfying for a while—lucrative and a quick means to establishing herself in Asia. But increasingly, Munirah wanted work to yield meaning, not just money. Without that substance to anchor her interest, the job became boring. Her career thrived and her family grew, but Munirah didn’t feel challenged.

At a crossroads, Munirah considered a job offer to lead institutional business at Principal. She wasn’t a salesperson, so she wasn’t confident she would do well. Then a mentor gave her advice that stuck. “Sometimes you need to test yourself and go horizontal, not vertical.”

The career pivot was less disruptive than Munirah expected, in part because a tidal wave of personal changes quickly followed. A year after their first son was born, her husband took a job in Australia, so their marriage became temporarily long distance. Her best friend passed away. In the first week of her new job at Principal, her father died. “That shook me,” Munirah says.

Grappling with the void left by the losses, she found herself questioning everything. She was tempted by job offers from Hong Kong and Singapore, but with a one-year-old, her husband in Australia, and her mom now alone, she couldn’t bring herself to leave Malaysia.

Instead, Munirah cocooned, focusing on work and family.

She sacrificed her social life, but the laser focus paid off. To her surprise, the institutional business came naturally. Her innovative investment solutions informed by economic acumen impressed clients, and her thirst for learning furthered her success. By age 32, she was rising through the ranks in a career she loved. At 38, she became CEO, having three more sons along the way.

Managing those competing worlds has meant embracing mistakes in both. “I am not and will not be perfect,” Munirah says. “But you are your only benchmark. My message to working women is to have a circle of support—then just go for it.”

She stays grounded through family, her main priority. “You can catch up on your career. Family sacrifices, you can’t catch up on,” she says.

In Principal, Munirah found an employer supportive of those priorities. Before becoming CEO, she had her fourth child. That meant taking three months’ maternity leave right after her promotion, a decision Principal supported fully. She’s also had help raising her family: a fantastic husband, a mom who lived with them, and a nanny to help care for the kids. While she admits that she works late too often and her household can be chaotic, she’s committed to connecting with meals together, reading to her boys before bed, and traveling during breaks.

Giving her home life that attention also ensures Munirah can bring her strongest self to the office. “If people aren’t happy at home, they won’t give their best at work,” she says.

That balance is easier when work has meaning beyond profits, she says. For her, that’s meant transforming her small Malaysian team into a global, digital-savvy powerhouse. “My team now knows they’re as capable as anyone else.”

Over time, Munirah began craving a stronger connection to her spirituality, and her Muslim practice deepened. Three or four years ago, despite common stereotypes about extremism, she donned the hijab at Ramadan. “Wearing the hijab is about being closer to my creator, who advises modesty,” she says. “It’s my right to wear it.”

After Ramadan, she didn’t want to take it off. Despite misgivings about whether she could remain effective in the boardroom wearing the hijab, a growing sense of self was her priority. Munirah continued wearing the headscarf, “because what I am shouldn’t be based on what other people want me to look like.”

Munirah’s fears were assuaged when she was asked to present at a global Principal meeting. Out of the 250 executives, she was one of 20 Asians and the only one wearing a hijab. The positive feedback on that day was vindicating—and liberating.

“What else can one ask for in a company but one that’s global, inclusive, and tolerant?” says Munirah “One that welcomes you if you’re a woman, of color, covered or not.”

Today, Munirah fearlessly brings her full self to work—in a job that spans the globe then brings her back home again.

“I travel to London, New York, Japan, China,” she says. “I have no qualms wearing my headscarf, meeting CEOs, inking multi-billion-dollar deals. You believe what you believe. You are what you are.”

With that self-assurance, Munirah can face whatever’s next. “Life humbles you. Once you know nothing is permanent, mistakes are lessons learned, not regrets. The journey becomes richer,” she says. “Every day, it’s a brand-new page.”

Newcastle University, Exxon, PETRONAS, and Rothschild Asset Management are not an affiliate of any company of the Principal Financial Group.

Munirah, thanks for sharing our story. I love your inspirations – you are running a great race!