Editor’s note: This article is a continuation of the Business Record’s 2021 women’s and gender survey results. We recognize that there are many opinions and ideas around this topic, but for the purpose of this story, we’ve only included ideas detailed in the survey responses. If you have your own ideas that you don’t see mentioned here and would like to submit a contributed piece, please reach out to emilyblobaum@bpcdm.com.

In our very first edition of Fearless last year, we examined the proportion of women in leadership positions in Iowa. The latest data from the Equal Employment Opportunity Commission shows that in Iowa’s private sector, women held 30% of executive-level leadership positions and 40% of midlevel management positions. Furthermore, women of color made up just 3% of leaders at the executive level and 8% at the midlevel manager level.

That’s similar to national data. In 2020, women made up only 21% of C-suite positions and 38% of manager-level positions. For women of color, that rate was 3% and 12%, respectively.

The latest analysis of Fortune 100 and 500 companies found that corporate boardrooms continue to be predominately white and male. In 2020, women held just over 25% of seats on Fortune 500 company boards. To break that down further, 21% were held by white women, 1% were Hispanic women, 3.1% were Black women and 1.5% were Asian and Pacific Islander.

In our annual women’s survey earlier this year, we asked, “What actions need to be taken to achieve gender parity in leadership positions?”

We sent the 85 responses to Tiffany O’Donnell, CEO of Women Lead Change, and Monic Behnken, director of the leadership studies program at Iowa State University, and asked them to help provide context.

Survey responses ran the gamut, but one thing was clear: Companies need to be intentional about making gender parity in management positions a priority.

“Equity needs to be a purposeful part of talent searches.”

“Create and enact purposeful policies and strategies from the hiring process to the review process. Just as importantly, recognize that change takes time and you simply need to start somewhere. People want transparency and the opportunity to participate in the conversation.”

“Require a certain number of seats on a board to be designated for women.”

“Aim for 51% females in the room every time a decision is made. There is no way to change the system to be more inclusive if we don’t purposefully include more previously marginalized voices.”

“If companies say they want more women in leadership, it has to be said from the top and they need to set goals,” O’Donnell said.

When it comes to setting goals, Behnken said it’s important to get down to the why.

“When you’re asking yourself what the benefit of gender parity is, you have to be clear on what it is you actually want to be the result of that.”

One way for companies to demonstrate that they’re serious about enacting change would be to simply acknowledge that there’s a disparity to begin with.

“Certainly some kind of forceful, concrete expression of, ‘We recognize that historically women have been excluded from these positions and we would like to do our part to reverse that,’ would be helpful,” Behken said.

Once the goal has been set, holding yourself accountable is the next step.

“If gender parity is something that is valued by an organization, it needs to be expressed in writing and it needs to be a part of that brand,” Behnken said.

Some survey responses encouraged companies to be open and transparent with their data.

“Report data to the general public so we know who is leading organizations.”

One of Behknen’s favorite responses was this: “Transparent salary policies. Internal audits within companies. Implicit bias trainings. Rewrite policies that are non-equitable or vague.”

“This gets to the idea that it’s the barriers that are the problem, not the women. If you’re trying to make changes, you want to make changes that are policy-based and will last beyond whoever is in charge,” Behnken said.

“Gender should not be the first identifier of the person.”

“I always say, nobody wants to be hired because of their gender,” O’Donnell said.

“Gender parity for gender parity’s sake, I’m not sure who that’s helping other than optics,” Behnken said. “Any time you enter the work of equity, you have to make sure you’re not doing it from a deficit-based mindset. Rather, you should do it from a strengths-based perspective.”

Companies should also be focused on getting women back into the workforce.

Perhaps more pressing than pushing for gender equity in leadership positions is the issue of simply getting women back into the workforce. The latest jobs report shows that there are still 1.8 million fewer women in the workforce than there were before the pandemic.

This is consequential for businesses for a plethora of reasons, the report stated. Company profits and share performance can be close to 50% higher when women are well represented at the top. Senior-level women are also more likely than senior-level men to embrace employee-friendly policies and programs and to champion racial and gender diversity, and they are more likely to mentor and sponsor other women.

O’Donnell believes that it’s imperative to be intentional about advancing women leaders.

“There’s potential for us to stall out,” she said. “We’re going to have to communicate more than ever about what we want to do, where we want to go and what our goals are.”

Beyond that, O’Donnell said, companies should continue to offer flexible work options if they want to encourage women to succeed.

“Men need to step down and understand the importance of lifting up women. White people in general need to stand back and put BIPOC in positions in power.” 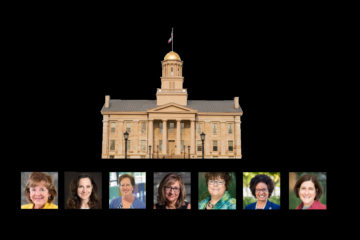 By Emily Barske, Business Record editor One of our goals with Fearless is to connect with people across the state who share goals similar to our mission of empowering Iowa women to succeed in work Read more…

Leading Fearlessly: Fighting for your rights at work

By Suzanna de Baca, president and CEO, Business Publications Corp. I still vividly remember a situation in a past job where one of my female team members tearfully confided that a high-level male colleague had Read more…